While we were waiting for a table, we stopped by the bar which boasted a selection of three hundred scotches. While we didn’t count them, it certainly looked as if they had close to that number!

We sat at the bar, enjoying a few drams as you would expect, and chatted up Steve, the young man working the bar. We asked him what he enjoyed, what he thought was the best value (Glen Goyne 21 was his choice as best value if you like a smooth and long finish, as a bottle is a great price for a 21 year scotch, though his first pick was the Balvenie Double Wood, also one of my favorites). 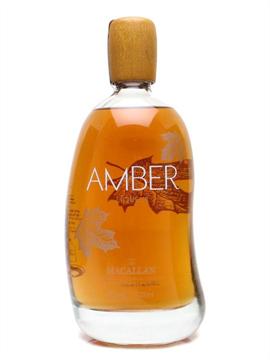 Eventually, he pointed out the Amber Macallan. None of us had heard of it before, though later internet research would reveal it is hated by most whisky enthusiasts (rightfully I think), and my friend had to try it. Just one sniff of the bottle was enough to dampen my interest!

It’s not whisky and if you try even a little bit with the expectation that it is, then you’ll hate it. However, if you accept it as it is, a liqueur, then it’s actually quite nice. You’ll need no tasting notes, as the maple syrup and pecans practically assaults you from the glass (when I sniffed it from the bottle nose, the maple syrup flavor dominated everything).

My friend, Rick, enjoys anything sweet. This liqueur was nearly perfect for him and that gave me a chance to try it. Since it smelled so strongly of maple syrup, I was surprised by its mouthfeel. It was like a regular whisky, not like a syrup despite its smell! The flavor of pecans is unmistakable and mixing it with the syrup actually gave it a flavor similar to hazelnut.

I was glad to have tried some of it (thanks Steven!) but there’s no way I could have more than a sip. It’s said that it goes well over ice cream, not surprisingly, but I can’t imagine drinking a whole glass of it. I do have to give Macallan points for creativity!