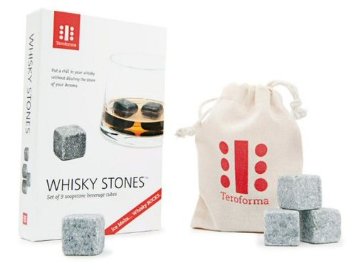 Whisky stones are made of soapstone, a metamorphic rock, and are often promoted as a way to chill your drink without diluting it. Ice can do it more effectively but it introduces more water when it melts. This isn’t as big of a deal with some cocktails, but water can drastically change the profile of whisky – which is why whisky stones have been popularized lately.

Personally, I prefer my whisky neat but I do have whisky stones in my freezer for when my friends come over and prefer it on the rocks, literally.

I’ve long wondered if whisky stones were safe to use because they’re not regulated by any agency. After doing some research, I learned that they’re completely safe for consumption because soapstone is hard enough not to leave anything behind. Teroforma is one of the most well known of whisky stone makers but any manufacturer will do – they’re just rocks!

The only potentially dangerous part about whisky stones is when you put them in your glass. You are, after all, putting a rock into your glass! Slide it in gently (or even better, use ice tongs — they’re really cheap), don’t drop it in, and be careful when you slide them out. The nicer your glasses are (ie. thinner walls), the greater the risk. If you’re careful, you shouldn’t have any problem.

4 thoughts on “Are Whisky Stones Safe?”