Today’s reader report comes from an event back in October of this year in which Gary, again at a $10 Binny’s Beverage Depot event, sampled Arran and Kilchoman.

Longtime readers of Scotch Addict are probably familiar with fellow reader Gary. He’s responsible for a bunch of fantastic reports on the site, including several duty free reports (Munich, Toronto, and LAX – just to name a few) and tasting events like a Laphroaig event in Binny’s.

I personally enjoyed this report because I’ve seen both distilleries at the local store but I’ve never tried either. I love the little stories that you get at these more intimate tastings, especially when you get a member of the family leading the event. For Kilchoman, James Wills, one of the three sons of Anthony and Kathy (founders), led the tasting of Kilchoman. James, according to Linkedin, is sales and marketing manager of Kilchoman Distillery.

Let’s let Gary take it away!

At this time Arran is using barrels from Heaven Hill, Beam and Buffalo Trace. Arran uses Oregon pine for its wash backs versus stainless steel used at other distilleries.

Arran makes its cut during distilling at 68% which they feel is the heart of their run. After the run the alcohol is diluted to 63.5% and put into barrels. The distillery runs 10 mashes per week. Their wort fermentation is approximately 52 hours.

In the early years Arran used mostly sherry barrels, but in the last 4 years they have gone to using 80% refill bourbon barrels. Arran is also moving into the peat zone. Their output has gone from 100% peat free to 70% peat free, 20% at 20 ppm and 10% at 50ppm.

Arran is still a young distillery, they put out a 16yo in 2013, and the 17yo this year. Next year they will come out with a 18yo. And to the whiskies we tasted.

10yo Sherry casks, One I liked quite a bit.Sherry was there but not over powering, sweet, floral with honey notes. Their flagship bottling if you will. 92 proof
14yo Aged more in bourbon casks, somewhat sharp in the tasting.not as sweet,less bouquet,bourbon notes more noticeable. 92 proof
17yo All sherry was decent for those who like a sweeter drink a bit of burn on the back end. Again 92 proof.
12yo cask strength which was a favorite of all of us. Very smooth for the strength 107.8 proof. This whisky did not need water but with water was really nice Had no problem standing up to the water.Some pepper notes.

Amarone finish made with a supertuscan wine barrels. These barrels were purchased from Allegrini winery in Italy. The whisky was aged for 10 months in the Amarone barrels, and bottled at 50 proof. A big whiff of black pepper on the nose and definite pepper at the finish. The color is rose/pink. I attached a photo which show the difference in color between the amarone and the 12yo cask strength.

They did have a bottle of the Machrie Moor but it wasn’t offered as part of the tasting. Would have been nice to compare their peated whisky against Kilchoman.

We enjoyed all of these, they reminded us of Glenfiddich, Glenlivet etc. which isn’t bad company. 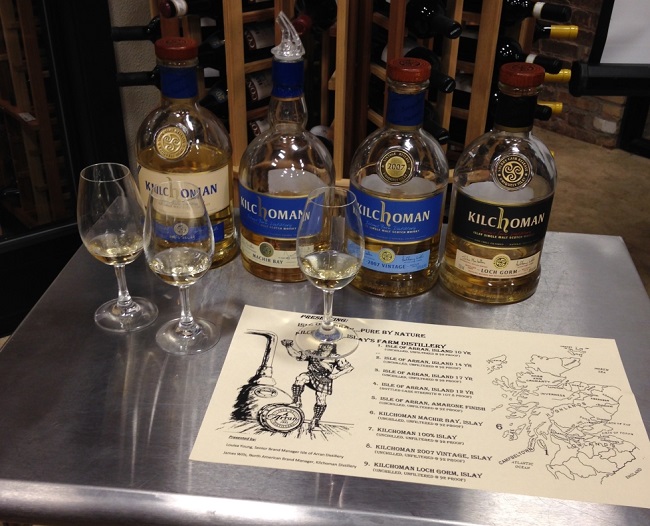 Use exclusively Buffalo Trace barrels for bourbon casks aging. The barrels are not broken down for shipment like many other distilleries. James Wills, [one of the sons of the founders, directed and tasting] and felt that many flavor elements are lost when the cask is broken down for shipment. So they do ship quite a bit of air with their barrels. (his joke)

They get a shipment of barrels around every 10 weeks. Truly a family run distillery, the 3 brothers and a few other do all the work, malting, botttling, and moving the barrels by hand.

James and his brother were helping with drying out the barley when they were younger. On that day England and Scotland were playing Rugby. The brothers were supposed to be turning the barley so it wouldn’t burn while drying. But they were more engrossed in the game. A neighbor came by and said it looks like your building is on fire. The boys were like no the barley is just drying. Well the building was on fire. The All Volunteer Islay fire department came and in putting out the fire caused more damage than the fire itself.

The distillery only bottles as needed, in other words only when stocks get to a certain level due to space and storage which they do not have much of either.

The ferment at Kilchoman is 100 hours long.Twice as much as Arran. James explained that yeast may not be making much alcohol towards the end of the fermentation but that the dead yeast falling through wort gives off acids and esters which add additional fruit notes, which transfer to the finished product.

The distillery fills about 21 barrels a week. The barrels are all on Islay and they use only dunnage storage. James said thisis due to the humidity that you get with all the barrels stored this way. The humidity and temperature are very constant and thereis not a huge amount of interaction between the liquid and wood, unlike bourbon which uses big temperature swings to force the liquid into and out of the wood.

Max production is 150,000L per year. I asked if they were considering an age statement bottling and it is possible but due to their limited production it may or may not happen.

Kilchoman Machir Bay has nice smoke on the nose, taste smooth fruity, no heat from the alcohol, then the smoke comes back, finish is not overly long but it is pleasant. 90% oak barrel, 10% olorosso 50ppm on the peat a mix of 5 and 6 yo whisky. Flagship bottling, always available.

Kilchoman 100% Islay is 100 proof using all Islay malt, from their farm. Malt grown and processed totally on site. peated at 20ppm. We tried the 4th edition which is limited to 10,000 bottles. The first edition was 7500 bottles. Aged totally in oak. Nose mild peat, very smooth on the palate, fruity no alcohol burn, light finish. This was first made in 2011.

Kilchoman 2007 vintage 92 proof is all bourbon barrel aged. Whisky is 6yo. Bottled 2013. Another limited edition. Islay whisky of the year 2013. Their vintage release is always the oldest whisky they have available to bottle. Very light, floral, smoke at the end.

Kilchoman Loch Gorm is 92 proof, All sherry butts. Good drink fruity, sherry overtones. Nose smoky but not really on the palate, smooth mouth feel, some smoke at the very end.

I have never had a dram from either distillery and while Arran was good, Kilchoman was great! I like their smoke/peat which is strong but it is not anything like Laphroaig.