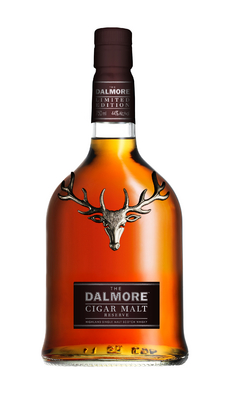 Very shortly, Dalmore will be releasing the Dalmore Cigar Malt Reserve for sale in the United States at around $125 a bottle. In working with their fine PR folks, I was sent a sampling of the spirit before it was available to the public (which is the basis of the tasting notes below) and the spirit lives up to its namesake. Scotch and cigars have always been a fine combination but it usually takes a heartier spirit (or a weaker cigar… but who opts for that!?) to match up to the richness of a tightly bound cigar. The Dalmore Cigar Malt Reserve was put together with that in mind and I believe it delivers.

The Cigar Malt Reserve is nearly the same rich dark copper/amber color as the Dalmore Mackenzie and slightly darker than both the Dalmore Gran Reserva and the Dalmore 15 Year Old. On the nose it’s sweet dry fruit, mostly raisin, some caramel and even a bit of syrup & butterscotch. It tastes just like it smells with a hint more of honey. No strong peat or smoke, you’ll probably get enough of that when paired with a cigar, and it has a full body that really awakens the palate. There s a little bite on the finish. I didn’t try this dram with a cigar but I imagine it pairs well with one.

Philosophically, I was surprised that Dalmore went to the sweeter, honey side of the flavor profile when building a dram to pair with a cigar – but it makes sense. Pairing is often about accentuating the positives, not letting one aspect dominate another or in dominating one particular flavor profile; they’ve succeeded in creating a dram that uses sweet fruitiness to balance out the smoky tobacco richness of a cigar.

If you don’t smoke cigars, this dram works quite well on its own if you are a fan of scotches that don’t have a lot of peat smoke character. If smokiness is a requisite quality you need in scotch, this one won’t fit that bill.

Update: I had it again the other night (about a month after I first tried it) and my impressions this time were much different. There was still the familiar rich sweetness of butterscotch and raisins, but I got a distinct smokiness I didn’t get before. The oak was also quite strong, which was nice, and there was a definite sea salt flavor mixed in. It reminded me of ocean spray, that salty air. I should warn that I tasted it after eating some mint ice cream about a half hour beforehand, so it might have muddled my palate a bit.