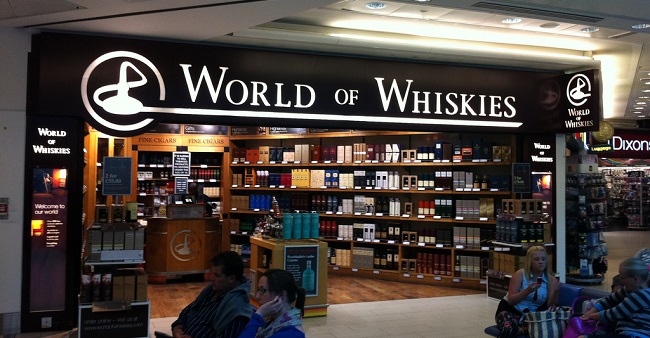 I just got back from a fun week-long vacation overseas which meant I had a chance to score a few gems going through duty free.

Sadly, when I went to checkout with a few bottles in Amsterdam’s Schiphol Airport, the cashier told me that I shouldn’t buy any scotch. I was going through Iceland and she warned me that customs would take it away… even though USA was my final destination.

Not knowing any better… I figured I could just buy a few bottles in Iceland anyway.

It turns out the bottles would never have been confiscated (I never left the security area) and Iceland’s Keflavik airport whisky selection, as you’d imagine, was much much smaller. 🙁

But, when life hands you lemons, you make some limoncello… right?

Before I get into what I ended up finding, to my delight, I wanted to briefly talk about how I take advantage of duty free shopping. I don’t travel abroad very much anymore, now that we have two young kiddos, so when I do, I need to take full advantage.

My Strategy for Duty Free Shopping

Years ago, when I was a novice at this game, I would just try to find things that were cheaper in duty free. So I’d find myself lugging around bottles of Glenlivet 12 or some other scotch I knew I liked.

After a few trips like these, I realized I was going about this all wrong. Duty free will save you a little bit of money but the real benefit isn’t in saving money… it’s in getting access to bottles you wouldn’t otherwise be able to buy.

That’s how you take advantage of duty free. Saving money is fine and dandy, but true value (at least for me) is getting stuff I can’t otherwise get.

If you ever see this term, or “travel retail,” written on a box or label, it means that it’s only made available through the duty free market (or on cruises, etc.).

Why do distilleries only make certain things travel exclusive? So it’s somehow special. Take a look at this listing of exclusive malt whiskies in World Duty Free, the operator of World of Whisky duty-free shop in Heathrow (and several other airports in the UK).

You can’t really trust the list (for example, you can get Ardbeg Corryvrekan outside of travel retail but you won’t find any of the Macallans), but you get the idea.

When you re-enter the United States, you’re supposed to pay a duty on products you bring back. Everyone gets an exemption though and this is a dollar amount ($200, $800, or $1600 depending on what it is) as well as a limit on certain types of goods.

For example, you can’t bring back any fruits and vegetables but there’s a limit on liquor. You can bring back one liter of alcohol per person if you’re over 21. Anything above that may be subject to a tax.

I’ve never been subject to a duty and I’ve traveled back with as much as 6L of whiskey before. I declare what I have on the form (in terms of dollar amount) and I’ve never been questioned about it. The worst case is that you pay a tax, the best case is they don’t really care and you pay no extra tax.

No matter what it is, I’ll probably like it. 🙂

While poking around in Schiphol Airport, I did see a Bruichladdich Octomore 6.2 and I considered it. That’s a case of where I might not like it, it being the peatiest scotch in all the land, and it was close to $300 USD. I’m all for splurging but I suspect it would’ve been too intense for me.

If you’re worried whether or not you’ll like it, think about what you don’t like about a whisky and avoid it. If you don’t like Islays, don’t get an Islay. If you like things sweeter, look for finishes in dessert casks like Port or Sauternes. If you like to be confused, get an Islay finished in a dessert wine, like Laphroaig PX (PX standards for Pedro Ximénez, a sweet dark sherry).

What did I end up with?

It turns out that Iceland’s airport had Monkey Shoulder, a blended scotch imported by William Grant & Sons. Fellow reader Wayne told me about it first (though several others have mentioned it… like Martin and Larry) but I wasn’t able to find anything locally. I haven’t opened it yet but I look forward to it.

Here’s what Wayne has said about it in our Facebook group (it’s set as closed but anyone can join):

This is a scotch blended of some very pedigreed scotches – Balvenie, Glenfiddich and Kininvie (I’ve never heard of the Kininvie), all from Speyside. At $34 bucks a bottle this might be the best value in scotch today! It has all of the attributes of a good Balvenie – rich, creamy, smooth, some caramel.

It’s not only the best blended scotch I’ve ever tasted, it outdoes many of the single-malts on the market. If you can find it, RUN, don’t walk and get some! (point of interest, the store I got it from didn’t even have it on display – they had ONE case from which they would sell ONE bottle per customer, by request!)﻿﻿

I also picked up Highland Park Einar, a global travel exclusive. It has a cool Nordin theme and, seeing as I was in Iceland, it felt like a good choice. I’m always a fan of Highland Park anyway so I figured you can’t go wrong!

So while I was a little bummed out about not having to go through security again, sometimes things just work out.

7 thoughts on “How to Take Advantage of Duty Free Shopping”