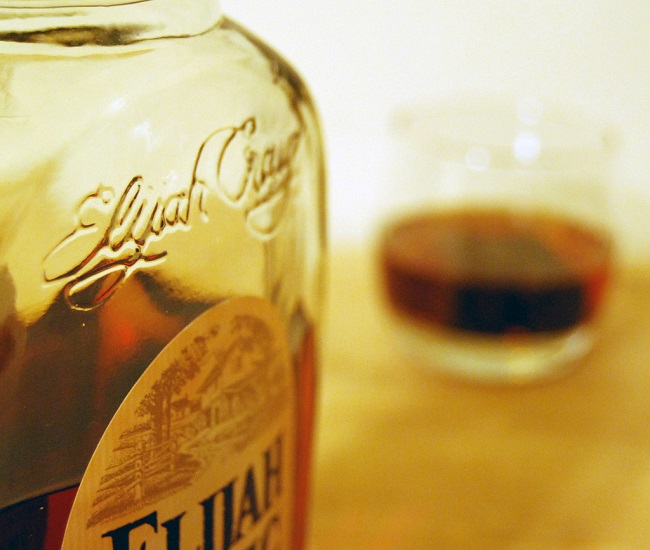 A few weeks ago, I mentioned I wanted to get into some bourbon whiskey and you guys sent in some fantastic suggestions. Until recently, my experience was limited to the stuff available by the 1.75L in plastic jugs (which barely qualifies as whiskey in the first place!)… but armed with suggestions from you connoisseurs, I picked up a bottle of Elijah Craig 12.

Quick history lesson for those curious about Elijah Craig – according to Wikipedia, Elijah Craig was a reverend and Baptist preacher who as born in Virginia, a part of it that would later become Kentucky, sometime in the early to mid-1700’s. It is believed he started aging corn liquor in charred oak casks, thus creating bourbon, though everyone will surely argue over this until the end of time. I just like that a reverend and Baptist preacher is credit with this at all!

You see, I bring a bit of scotch whisky baggage with me when I drink bourbon. Bourbon is sweet because of all the corn in the mash bill and so it’s something new for me.

Sweet is by no means bad (unless you hate sweets… then you’re on your own!), it’s just different.

The abv is high, 47% alcohol by volume (94 proof), and that’s another trend I see with bourbon. Most are higher than your Scotch standards of 40% and 43%. Not quite “cask strength” in the 60s but a shade higher.

I was able to find a Elijah Craig 12 YO at my local store for about $30, which puts it in the same price range as a Glenlivet or Glenmorangie (but more alcohol!). That makes sense, as it’s aged 12 years old, but you can find younger bourbons for much much less (for example, Bulleit Bourbon is only $22 for 750ml). Another pattern I see is that bourbon is often cheaper, which makes sense because Scotch has to be imported.

Onto the notes, and remember that these are from a Scotch drinker not used to the sweetness:

Overall, I thoroughly enjoyed it. Interesting side note, after enjoying some Elijah Craig, I immediately had some Basil Hayden in order to compare the two. Basil Hayden wasn’t as sweet, which was nice, but it goes to show you it’s all a matter of reference.

What are your thoughts on Elijah Craig?