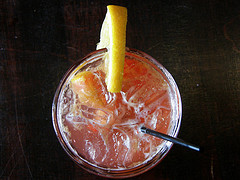 We’re hosting a 4th of July party this weekend and one thing I wanted to do was make a fun summer cocktail that featured whisky in a way that wasn’t overpowering. When I think of enjoying whisky, I usually see myself sipping it neat while sitting next to a roaring fire in the fireplace. We’re not starting any fires in the heat of the summer and chances are we will be outside, so whisky neat in a red solo cup just seem disjointed in my mind.

Also, what I don’t want to do is start serving mixed cocktails like I’m some kind of bartender. I’m all about being a good host but I’d still like to enjoy our party! So I found this little guide to making a whisky punch extremely helpful because it went into the approach of making a punch, it didn’t just throw out a few recipes and not teach you how to make one.

One popular punch recipe that works well when converted into a punch is a whisky sour. A whisky sour is simply 1.5 oz of whisky, 1.5 oz of lemon juice, combined with 0.75 oz of simple syrup. To turn it into a punch, you need to dilute it in a juice of some kind and often people go with orange juice and club soda. Drop in some ice, top with a cherry or some orange slices, and you have yourself a nice little summer whisky punch.

If you look for recipes, you’ll see a lot of similarities. Many of them use a mixture of pineapple juice, for sweetness, along with your sours (lemons) and sweets (orange juice). The weak they typically turn to is ginger ale, because it’s not overpowering and lets the whisky still shine. If ginger ale is too sweet for your tastes, go with club soda so it provides some fizz.

The key is learning how to make a punch, because anyone can look up recipes, and now armed with the “5 ingredients” ratio approach, you can start deconstructing recipes and figuring out what you like and don’t like.