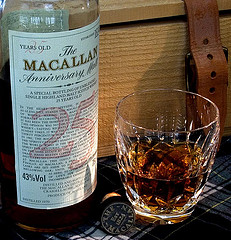 The real question, however, is – is older is always better?

My gut feeling, and it’s definitely a gut feeling, is that older can be better but that’s not always the case. My favorite story about aging whisky was when my wife and I went to The Macallan distillery. We took the tour and then opted for the Most Precious version, which involved enjoying several drams of nearly their entire line of scotch. My wife isn’t a fan of whisky so she took a tiny sip of each and made her usual face. She enjoys the smell, she just finds the taste overpowering. That is… until she tried the 30 Year Fine Oak. At a retail price of around $900, I’m not surprised she was a fan.

The oldest scotch I’d ever had is that 30 Year Fine Oak during the distillery tour (I’ve had it a couple times since on special occasions) but I routinely have 12, 15, and 18 year old scotches from the same distillery. I’ve always found that the 18 year old is usually smoother and has less bite to it as compared to the younger versions. In some cases, I like that bite (for example, I prefer the Glenlivet 12 because the heat from the alcohol and the spiciness on the finish complement each other), but in others I don’t. It’s a matter of preference.

Next, is there such a thing as too old? Kara Newman of Slate tried some 50 year old Glenfiddich and was wondering that very thing. She asked a few knowledgeable folks and the answer is that yes, it can be too old. Ultimately, it comes down to preference. The longer it’s in the barrel, the more the barrel imparts on the spirit. Can it do too much? Of course. I enjoyed that she asked several experts in different spirits, not just whiskies, but I wasn’t surprised by the answer.

Older isn’t always better but it often is. Now is it worth it to buy the older bottle? That’s up to you. You can buy over four bottles of Macallan 18 for just one bottle of Macallan 30 – which do you think is a better deal? 🙂