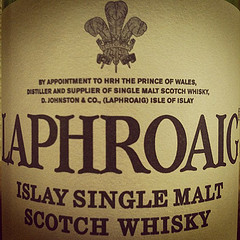 Laphroaig 10 is one of the cornerstones of any Scotch whisky library and a name that most aficionados are familiar with. Hailing from Islay, it has all the characteristics you expect – peat, smoke, even medicinal (smells like band-aids though not as iodine-y as Lagavulin) to go along with the spice. It smells like a campfire, there’s no mistaking it, and I love enjoying it besides one or sidled up to the fireplace.

I have friends who absolutely love Islays and hate other regions (“Speysides are too sweet and floral, it’s like eating a flower”). Other friends hate Islays because of the smoke and iodine (“It’s like chewing on charcoal wrapped in a band-aid”).

Hey, to each their own right? You like what you like, so let’s find more of it.

I think it’s an acquired taste and while Laphroaig isn’t as smoky and peaty as Ardbeg (peatiness is measured in parts per million of phenols and Ardbeg is king), but it has enough punch that you couldn’t mistake it for anything else.

I recently picked up a bottle in order to taste it side by side next to the Laphroaig Cairdeas (2013), which quickly became a favorite of mine. The difference between the two is significant. The Cairdeas, having matured about 14 months in port casks, is much sweeter and masks much of the medicinal flavors of the 10. The smoke is still there along with the seaweed and salt but the medicinal nature is almost completely gone.

As Paul commented, “The only thing I would definitely say is that the port wood edition is not the way to have someone tell if they like Laphroaig because it is so out of step with literally every other scotch they produce.”

One thing I didn’t do last time was add some water, which is said to open it up immensely and release the sweetness and maltiness. At 40% abv, I didn’t think to do it (not that % of alcohol is any indicator), so next time I’ll give it a try.

Locally, it’s available for $50, which is pricey for a 10 year old scotch but about par for an Islay. Ardbeg 10 goes for ~$56 and Lagavulin’s youngest standard bottling is a 16 YO for $68. (while there are other Islays, Laphroaig, Lagavulin, and Ardbeg are the three most widely available in the United States).