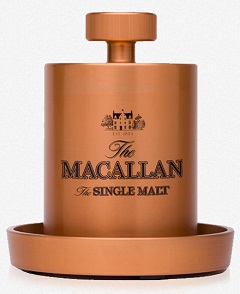 A few years ago we went to a Celebrate the Macallan event down in Washington D.C. at Ibiza, a downtown nightclub. It was a fun little affair where we heard a presentation, sampled some scotch, and just had a jolly good time.

One of the things they showcased as an ice ball maker that took an enormous ice cube and melted it, basically, into an ice ball. The device is what you see to the right.

I don’t normally put ice in my scotch, I prefer my scotch neat but the presentation was pretty cool. That said, the ice ball maker sells for £650 on the Macallan website. That’s over a thousand dollars USD. It was cool but not that cool.

The argument for a perfectly cylindrical ice ball is that it’ll melt slower because it has a smaller surface area, compared to an ice cube of that size. You can cool your beverage without introducing as much water. Given the price, I’d probably buy some whisky stones before dropping a grand on a ice ball maker!

That said, there are ways you can make ice balls that won’t cost you a thousand bucks. You just need to buy ice cube trays shaped as balls. They look like ice trays except each one has a locking lid that forms a sphere. I have no idea how well they work but it seems pretty straightforward enough!

My personal favorite?
This Star Wars Death Star ice ball maker. It’s “cheaper” than the sets I list below but it only makes one ball at a time, so technically it’s more expensive per ball… but who cares, it’s the Death Star! (it’s also made to handle hot or cold so you can bake in it too.

Or you can go with massive ice cubes too!

If you have an experience with any ice ball trays, please share it in the comments!