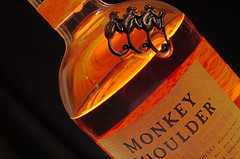 Many years ago, I was in a Costco in Delaware when I discovered that Kirkland had a branded bottle of single malt from Macallan.

Back then, I knew far less about scotch compared to today. I knew the name – The Macallan – but I knew little else.

The price was right, I bought a bottle… and quickly polished it off (cursing myself for not buying more!). It was good.

For the longest time, I thought that was a mystery malt. The mystery wasn’t in the distiller (duh, Macallan) but in what was inside, since there was no age statement. I would later learn that it’s not technically a mystery malt, it was simply Costco/Kirkland bottling The Macallan. You can see all sorts of bottlers do this nowadays and more of the bottles in stores. The label will be standardized for the bottler and then you’ll see a distillery name underneath (usually with the year it was bottled and sometimes an age statement).

A mystery malt is something completely different and the inspiration of this post came from our Facebook group where reader David found a mystery malt at his local Trader Joe’s – Lismore.

Lismore is a mystery malt.

A mystery malt is a blend of a variety of whisky where none of the names are (usually) listed publicly.

As you’d imagine from a Trader Joe’s branded product, home of the Two Buck Chuck, Lismore is pretty cheap – usually under twenty bucks. And we have no idea what’s inside. Trader Joe’s doesn’t sell any alcohol in Maryland stores so I’ll defer to David McCowan’s writeup on Chicago Foodies but apparently it’s not bad… for $18. 🙂 [another review on Whiskey Catholic]

A fan favorite of Scotch Addict readers, Monkey Shoulder, is also a mystery malt. It’s one of the few that lists the malts included, in this case Kininvie, Balvenie, and Glenfiddich. Those more experienced with Monkey Shoulder will know that you can buy Balvenie and Glenfiddich in almost any store, finding Kininvie is nearly impossible because it’s not sold (more info on Kininvie distillery here on Master of Malt) publicly (yet).

I’m skeptical of mystery malts and would caution you to do more research about it before buying one.

Many of them lure you in with a cheap price (Shieldaig Speyside 18yo is tempting at $40) but you have to recognize you get what you pay for. There’s a reason a good 18 yo single malt starts at $80, don’t expect to get the same when you pay $40.

Oh, and everyone I’ve ever talked to has warned me against McClellands. 🙂

6 thoughts on “What is a Mystery Malt?”