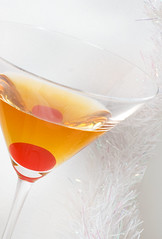 When it comes to scotch, I think it’s best served in a scotch tasting glass and with nothing else. Some prefer it on the rocks but I usually have it neat (without ice).

There are, however, plenty of scotch mixed drinks and it’s always fun to read about them to see what people have tried to elevate it. Today, we’ll be taking a look at the “Rob Roy,” which is considered the Scotch whisky version of the Manhattan. The Manhattan is pretty much the same recipe with rye whiskey replacing Scotch (you can use any type of whiskey or bourbon to make a Manhattan).

The Rob Roy is named after Robert Roy MacGregor, who was a Robin Hood-like figure from the 18th Century.