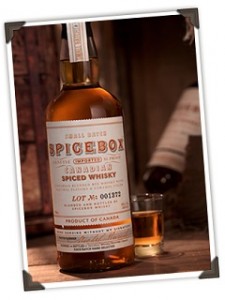 When it comes to whisky, I generally try to stick with Scotch aged 10 years or older. It’s not an issue of snobbery, it’s that my palate isn’t hearty enough to handle whisky that’s only been aged 3 years. There’s also the issue of depth… when you have ten plus years to mature in a barrel, that’s a lot of time for flavors to mature and intermingle. Three years just isn’t enough. And certainly three years in brand new casks, as it what is typically used in stateside whiskies, doesn’t add as much depth as ten years in a formerly bourbon barrel.

That said, variety is the spice of life and I recently had a chance to sample a whisky from Canada. A hallmark of most Canadian whiskies is the use of rye grain, though its use is not dictated by law, and Spicebox Canadian Spiced Whisky claims to use great rye in their blend. Spicebox’s whisky is a blend of whiskies aged in bourbon barrels from 3-6 years. In addition to the blend of whiskies, they add in additional flavor with vanilla beans and a “secret blend of spices.”

Why are they named Spicebox? I thought it was because it’s called spiced whiskey. While there are spices in the blend, that’s not the origin of their name. Turns out that during Prohibition, our fine friends to the north would smuggle whiskey in wooden barrels marked “spices” and thus the Spicebox name was born. It’s actually quite enterprising. 🙂

It’s a light amber color with wonderful aromatics, you can definitely smell the vanilla and a general sense of “spices,” though I couldn’t really put my finger on it. If you are a fan of Speysides, this is closer to a Speyside in its sweetness, with vanilla and caramel. It’s smooth for a spirit aged only 3-6 years, I was surprised by that, and I can see this being popular in a mixed drink.