Balvenie emailed me a special sweepstakes they’re running for the holidays – you can win a scotch whisky aroma nosing kit.

Just in time for the holidays, The Balvenie is offering the chance to win a one-of-a-kind prize: An exclusive Scotch Whisky nosing and tasting kit. This unique kit contains 24 separate aromas and a dedicated nosing guide, as well as other essential whisky tasting tools. The lucky winner will also receive an exquisite Balvenie hipflask.

One of the coolest parts of the Macallan tour was their coopering and nosing areas where we could smell various aromas (it really highlighted the difference, at least for us, between dried and fresh fruits). This nosing kit is that fantastic experience in a kit and it’s appropriate that another premium scotch producer, Balvenie, is the one to come up with it. I’m a huge fan of their DoubleWood and at the moment I have a PortWood I bought in Heathrow duty-free just sitting in the case… waiting for the perfect occasion.

This would make a fantastic holiday gift, but I don’t believe they sell it. 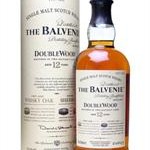 I first tried The Balvenie DoubleWood (12 Years) in England at my friend David’s home in Beverly last Thanksgiving (had a great Thanksgiving meal too!). Well, it wasn’t until only recently that I bought a bottle for myself (two in fact, I forgot I already had an unopened bottle when I bought another in duty free two weeks ago) and it wasn’t until last night that I uncorked it.

At the time, what struck me about the DoubleWood was that it was matured in both whisky oak casks and oak sherry casks. The term “whisky oak casks,” listed on the label of the bottle, refers to bourbon whisky casks purchased from bourbon producers in the United States. US law states that bourbon casks may only be used once, so after the first use they’re useless to bourbon producers! The second cask of oak sherry is known as a finish, where the whisky is allowed to spend six to twelve months in a cask once used for sherry and picks up a bit of flavor.

Last November, my experience with scotch had been very limited. I was familiar with the smokiness and peatiness of Islays, as my friends had taken a liking to Laphroaig and Lagavulin (and to a certain extent Talisker). I was also familiar with the easy going clean and smooth flavors of Speysides, but it wasn’t until The Balvenie that I had something quite as sweet.

I get a strong vanilla on the nose and a hint of fruit sweetness, though I can’t place what fruit it is. Tasting is a thoroughly enjoyable experience as it’s sweet with a bit of spiciness. It benefits from breathing, as the strength is very present, and I used the time as an opportunity to continue sniffing it. The finish is warm and inviting but not terribly long, just long enough until the next taste.

(at some places the Balvenie DoubleWood is listed as 40% abv, my bottle was listed as a 43% abv)