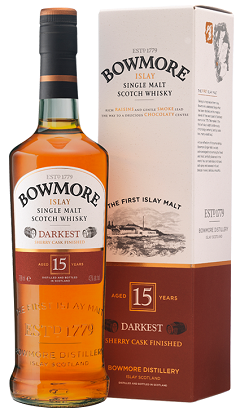 In my evolution as a Scotch aficionado, I discovered Bowmore far too late… but better late than never!

I believe my first introduction was a gift from my good friend Rick, whom you may remember from my post about scotches for a special occasion (he had the good fortune of filling his own Aberlour bottle), and he gifted me one of Bowmore’s travel retail gems – Bowmore Enigma (no longer available, they’ve revamped their travel retail lineup for 2014).

With Bowmore Enigma I had my doubts – it had kind of a hokey name. Enigma. Ok, it’s mysterious, ooooh big deal, your marketing won’t fool me!

But the moment hit my lips I realized how much I appreciated sherry matured whiskies. It was sweet but not bourbon sugary sweet, it was a rich sweetness and that’s something I found in Darkest, which is part of their regular lineup. Since then, I’ve been a huge fan of Bowmore.

Darkest is enjoyable if you aren’t expecting the smoky punch of your typical Islay.

Darkest iss matured in a combo of bourbon and sherry casks but then finished in Oloroso sherry casks in its final 3 years. I’m a sucker for finishes like port and Oloroso sherry and as a result, I’m a sucker for this. I like the rich flavors the finishing passes on and given a choice between the smokiness of Islay, which I love, and the rich sweetness of a port finish, I’ll go with a port finish (which is why a Laphroaig Cairdeas, which is an Islay finished in port, tops my list of favorites).

It’s priced at $80 at my local store, which seems a little bit on the high side, but I did enjoy it because I’m a sucker for chocolate, dry fruit, and a reminder that it’s an Islay. 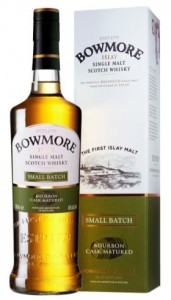 I was sent a sample of Bowmore’s newest expression, Bowmore Small Batch, and as a fan of Bowmore (Percy in our Facebook group just picked up a first batch Bowmore – The Devil’s Casks… I can’t wait to hear how that is when he gets around to it!), I was eager to see their latest release.

So the first fill is said to pass along the typical flavors you associate with a ex-bourbon barrel matured whisky – vanilla, sweetness, and some oak. The second fill passes more fruity flavors and honey. While it makes for a delicious dram, from the a business perspective it makes great sense to be able to use more barrels in a creative way. 🙂

In terms of the smoky, peaty, iodine (band-aid) punch most Islays bring, this one is really just a gentle reminder of its origins. There’s a bit of peat smoke on the nose, a little on the finish, but nothing like the Islays you might be familiar with, especially if you love Islays.

If you have a bourbon friend who has heard of Islay but a little timid about peat smoke, this is a good way to gently introduce them to the wonders of Islay scotch. It has all the reminders of bourbon but its feet are still firmly in Scotland.

Personally, I’m not quite sure if it’s for me. When it comes to food or drink, I like it when something is big and bold and assertive. I like my Islays to smell and taste like a campfire the next morning (ok ok, taste like the campfire smells… I’ve never tasted a campfire!).

I like my food to be really spicy when it’s spicy. I want my seafood to taste like it just came out of the sea. This one seems to be an Islay on training wheels and the bourbon influence isn’t distinct enough to make it really put forward a single assertive foot.

But that’s not what the Single Batch seems to be about. It’s trying to gently introduce someone to Islays, which Bowmore certainly is, and I think it’s trying to introduce themselves to a new market and show that Islays don’t have to be scary and smokey and peaty. On that score it succeeds.

Have you tried it? What do you think of it? 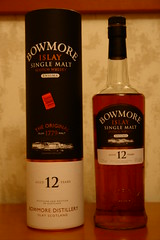 Bowmore is a distillery that hasn’t graced the pages of Scotch Addict all to often not for any particular reason other than there are just so many fine scotches! Bowmore, an Islay, was founded in 1779 and has all the characteristics you associate with Islays. Smoke. Peat. Both in spades.

We had friends visit this past week and, knowing how much of a fan of Scotch I am, brought something they figured I hadn’t tried. Bowmore, in addition to its core range and limited editions, has started a fun series in the travel retail market in which they try to accentuate a characteristics of their scotch. The four editions are: