One of the most entertaining parts of the Macallan Distillery tour was the section on the art of coopering, or barrel-making. I always implicitly knew that the barrel played a significant role in the taste of whisky but until the tour I never had a name for the art, coopering, nor any basic understanding of what led to what.

One of the biggest factors, besides the maturity time, has to do with the type of wood the barrels are made of. The wood itself is almost always oak, though at times spiritmakers have experimented with other hardwoods. With oak, you have two options – French Oak and American Oak. In many years past, the differences between the two were more pronounced as French Oak, with its tighter grains, imparted its flavor more slowly. However, as American coopering started adopting some of the French coopering practices (splitting staves along the grain and air-dry seasoning for 24 months), the differences have diminished over time.

Having sampled Macallan’s new make whisky (what goes into each barrel), I can definitely say that the aging process in the barrels really gives scotch its depth of flavor. 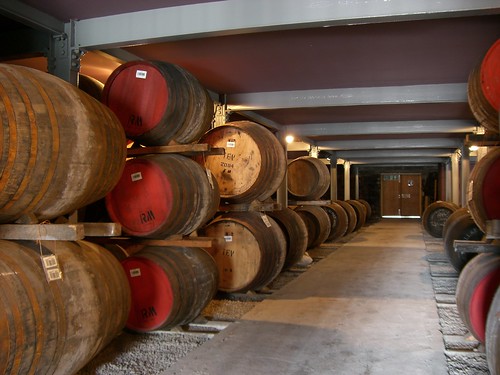 [Slide 6 of the Slideshow]

Time has an incredible slideshow looking at the art of coopering at the Speyside Cooperage. If you aren’t familiar with the term, a cooperage is where whisky casks are made and the art of coopering is the craft itself. On a recent trip to Scotland, my wife and I tried to visit the Speyside Cooperage but arrived after it closed so this slideshow is the next best thing. 🙂

If you fancy another Time article, here’s a good one titled Whisky Business worth a look as well.