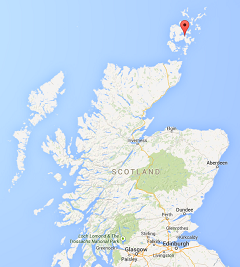 Look how far north that is!

I haven’t written many tasting notes from Highland Park, though I’ve had my fair share, and today I get a chance to remedy that with a look at Highland Park Dark Origins.

A little background on Highland Park, it’s the northern most distillery in Scotland and located in Kirkwall, Orkney. There it is on the right under the red location marker! The biggest confusion about it is that it’s not from the Highlands, which is the area that surrounds Speyside. The name comes from the local area being named “High Park” because it’s higher than the area around it. The confusion is significant because Highland uses locally cut peat and that imparts distinct flavors to the spirit, a flavor that is absent from traditional Highland and Speyside malts.

In terms of peatiness, it’s believed that Highland Park peats their malt to 20 ppm, which puts it well into the realm of Islays when it comes to peatiness (at least measured scientifically).

Where does Dark Origins fit it? The name Dark Origins refers to the illicit distillery run by founder Magnus “Mansie” Eunson that would later become Highland Park. What separates it from Highland Park 12 is that they used twice as many first fill sherry casks and so much of what is passed along to the spirit is more intense.

Dark Origins has no age statment (NAS) and the bottle looks awesome. I had mentioned that I thought Bruichladdich Octomore’s matte black bottle looked sexy as hell and it looks like HP took a page out of that book, going with a black matte bottle as well.

Dark Origins is bottled at 46.8% ABV (non-chillfiltered, though it wouldn’t have to be) and I found it listed for $89.99 locally. It’s currently unavailable though.

That puts the price above the 15 YO ($88) but below the 18 YO ($140). General impressions is that the increased use of sherry gives his a lot more flavor, punch, and body; I’m a little hesitant about the price tag though, $90 for a NAS with its aged cousins so close by makes me pause. That said, if I knew nothing and purchased this on name alone, I wouldn’t be disappointed and I wouldn’t think I overpaid – it’s definitely worth it.

Update: For what it’s worth, the suggested retail price is only $79.99… the local store was marking it up by ten bucks! I retract my earlier hesitation. You might ask – “does $10 make a big difference?” The answer is no, not really, but when you’re in the store, $89.99 and $79.99 look very different.

If see Bowmore Darkest 15 YO at $79.99 and Highland Park Dark Origins at $89.99 (they are not the same but singing familiar tunes), maybe I pick up the cheaper one with the age statement. If they’re both similarly priced, I might go with HP Dark Origins simply because it’s new (FWIW, I am impartial to age statements… i.e. I’m not a snob about it).

And the bottle looks badass! 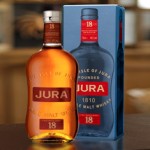 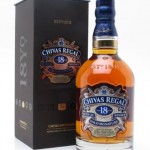