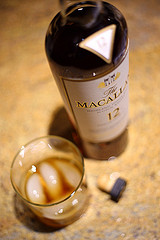 When ordering scotch, it’s often important to indicate how you’d like it. There are really only two choices in the scotch world:

If you use any other terms, you’ll just confuse the bartender. If you forget which is which, just explain it and the bartender will gladly serve it the way you like it. 🙂

If you’re at home and want it neat but a little chilled, consider whisky stones. A little chill without any of the pesky water.

What’s the best glass?
If you’re enjoying your Scotch neat, I recommend one that has a tulip bulb shape – where it tapers near the top to direct the scents to your nose. You have the classic Glencairn glasses, made and marketed as “the” scotch drinking glass. I personally prefer Glencairn glasses or Reidel’s Vinum Single Malt Whiskey glasses (though they are much pricier) but either will be fine.

You won’t often see these glasses at bars, given how relatively expensive they are, but if you enjoy scotch at home with any regularity then they are worth the investment!

As for enjoying it on the rocks, any heavier Old Fashioned glass will do. The tulip bulb shape of the Glencairn, and it’s generally much smaller size, makes it hard to put ice in. An Old Fashioned glass, which you can also use to make cocktails, is better with the ice.

Ultimately, it’s about what’s in the glass and not the glass itself… I’ve had delicious scotch in a red Solo cup before. 🙂

Oh, and for what it’s worth, I wouldn’t drink Macallan 12, or any decent single malt scotch, on the rocks. Those distilleries work hard to make a good product and I want to enjoy their masterpieces, I don’t need frozen tap water messing up the balance!