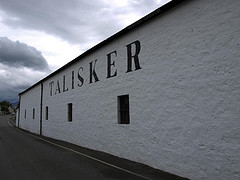 One of my more recent fun discoveries is Talisker.

Talisker is by no means a rare single malt, it’s one of Diageo’s “Classic Malts”, so it gets more than its fair share of marketing dollars. I also put classic malts in quotes because it’s more marketing than common accepted facts. For what it’s worth, the six included scotches do hit up the major areas of Scotland so it’s not an unfair claim, it’s just a marketing one.

OK, back to the task at hand – Talisker.

Talisker is an Island single malt and the only one on the Isle of Skye. In terms of Scotch Whisky Association’s region categorization, it’s part of the Islands sub-region of the massive Highlands. Founded in 1830 by Hugh and Kenneth MacAskill, the distillery’s name comes from the settlement it leased land from, a settlement owned for centuries by the Clan Macleod (the clan of the fictitious Duncan and Connor Macleod from the Highlander series!). Talisker was acquired by Diageo in 1925.

Talisker’s regular lineup features a 10yo, 18yo, 25yo, and a Distiller’s edition. I’ve had the 10yo before but none of the others, so I had a sense of the spirit of Talisker before we got started. The remarkable flavor I always take away from Talisker is their ability to capture sea salt and the ocean in their whisky. You get the smoke, you get all the hints that it’s an island malt, but no one else (to my knowledge and experience so far) has captured the ocean in a bottle.

One distinction for Storm is that it carries no age statement, which is something Diageo has been trending towards (and a point of debate in our Facebook group), and they use a mix of first-fill and refill casks.