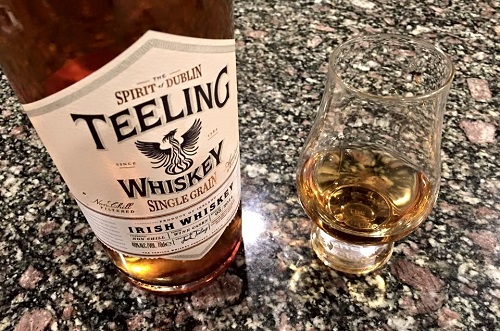 Single grain means that it’s, in part, made with grains other than malted barley (in this case, corn). By comparison, Scotch is, by law, only malted barley. So this is a bit of a departure from me already, but my friend Rick gave this to me as a Christmas gift because he knew I was adventurous and this was something I’d have a hard time finding locally (he’s right, of course).

So we already have a different mash bill, then Teeling matures the whiskey in California Cabernet Sauvignon casks. It’s not as crazy as their Single Malt, which is matured in five different wine casks (Sherry, Port, Madeira, White Burgundy and Cabernet Sauvignon), but it’s still a departure from the what’s I’m used to (ex-Bourbon barrels).

What did I think? It’s tasty!

I don’t have a lot of experience with Irish Whiskey, or single grain whiskey, so I really have no frame of reference. It’s light, has some bite because it’s bottled at 46% abv, and is easy to drink. The lightness is something I’ve come to appreciate about Irish whiskies, despite how much of a novice I am, and none of the flavors really punch you in the face. It’s corn based but it’s not overly sweet, like some bourbons can be, and the Cabernet Sauvignon maturation really adds a lot of fruity and floral characteristics, in addition to the oak.

Teeling Single Grain was awarded the World’s Best Grain by the World Whiskies Awards in 2014, and it’s really interesting to read the notes by the judges. Does anyone know what orange fondant syrup is? 🙂