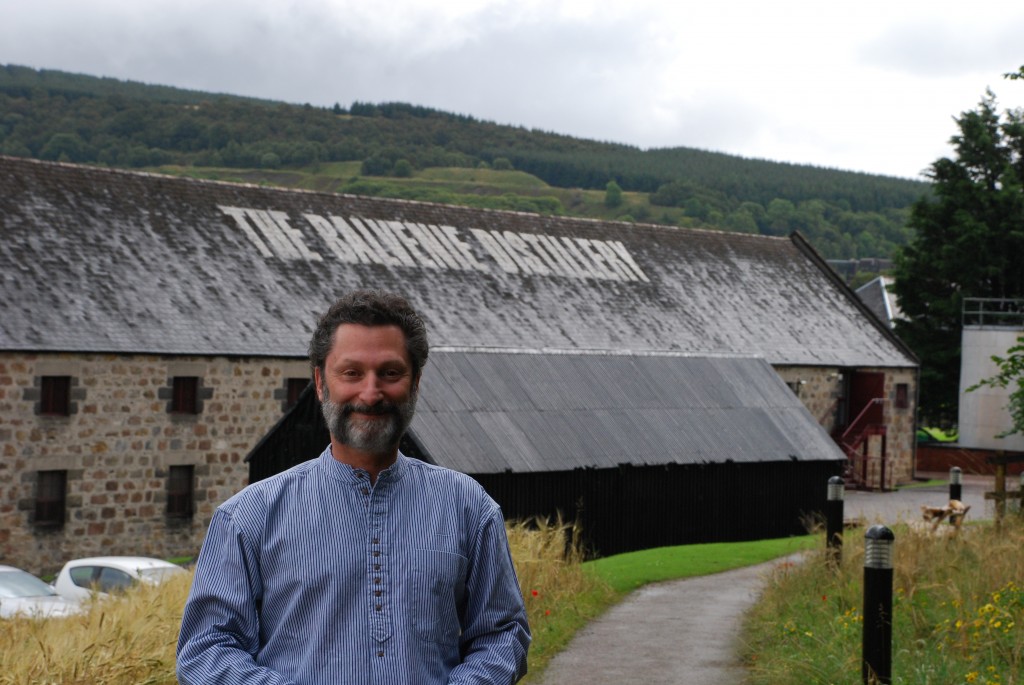 This two part series comes from reader Wayne, who is a staple in our burgeoning Facebook Group. He shares with us his experience touring several Scotch whisky distilleries this past summer. I’ll sprinkle in a few of my thoughts through but this is an awesome recap with some amazing pictures guaranteed to make you jealous! Part two will be published next Monday.

We’ve wanted to do a tour of Ireland / Scotland for a long time, so my wife and I decided it would be a great present to give to each other for our 30th anniversary. The Ireland part was for her – the Scotland part was for me! 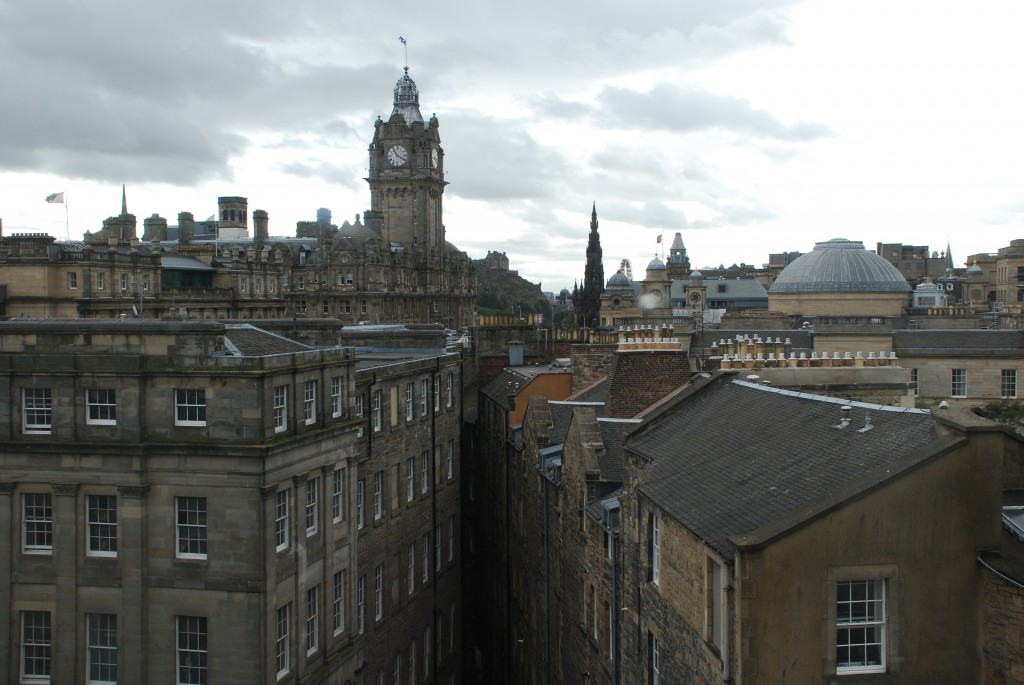 For the Scotland portion of the trip, we flew in to Edinburgh on a Sunday afternoon. Before I start talking about our distillery visits, I have to say, Edinburgh was the COOLEST city we’ve ever visited, and we felt a little dopey for not scheduling more time to really enjoy the city.

We also happened to hit it, totally coincidentally during the Fringe Festival, which was a lot like Mardi Gras! What fun! 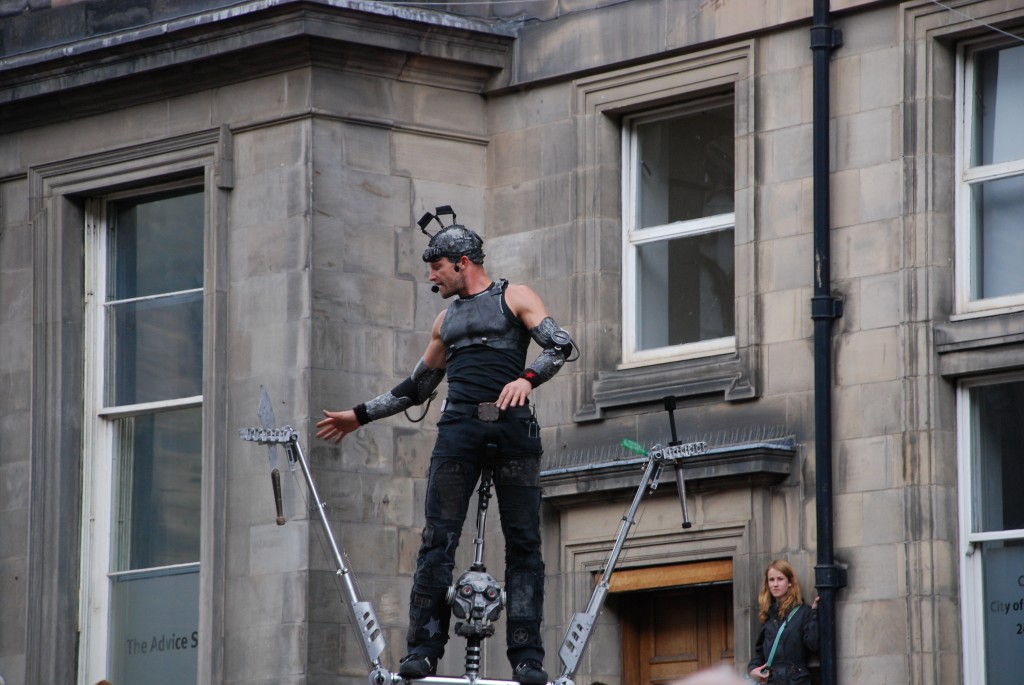 Okay, enough of that. We engaged a tour service (Exclusive Scottish Visits) and our driver, John Harbour picked us up on Monday morning to start our drive up to Speyside. We were scheduled to be there for 4 days, and it was suggested that we visit distilleries in one region, which was fine with me.

Speyside is where Balvenie is, so that was an easy, if not automatic choice for me! Along the way, our driver called our attention to many points of interest we would have missed had we chosen to drive ourselves. 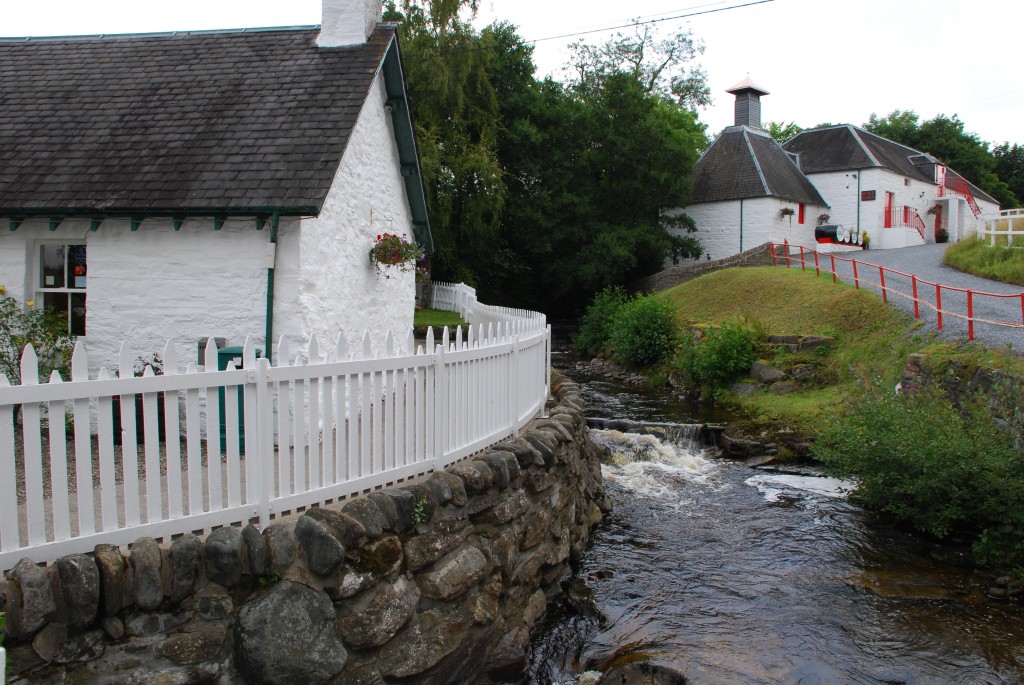 It’s a 3-hour drive to Speyside from Edinburgh, so our first stop was to Edradour in the early afternoon. This is the smallest distillery in Scotland – a statistic they are actually very proud of. Nevertheless, the tour group there was surprisingly large – maybe 12 people.

They bring in the barley but do have a malting barn. They (as every distillery claims to) use water from a nearby mountain spring. The tour guide was extremely friendly and went to lengths to explain their process. After seeing the fermenting process and then the stills, we moved on to the tasting.

Unfortunately, many of the areas at the distilleries are designated as “no pictures allowed” places. They say it’s a safety issue in that either the very fine powder in the air, or the alcohol in the air can explode with the right kind of spark.

That can ruin your whole day!

For a small distillery, they offer a TON of different scotches, AND a scotch-based cream liquor, which we did taste… it was actually quite good!

We also tasted a 10-year scotch aged in Barolo Wine casks. That was different, and I didn’t like it as much as the 8-year regular oak-aged selection we had. Either way, it was evident that their whiskies are of very high quality, but I’d be hard-pressed to say they had a characteristic “Edradour flavor.”

A point of interest was the casks we saw there with other distillery names on them. Apparently the whisky industry in Scotland is VERY incestuous… everybody seems to share with everybody else. 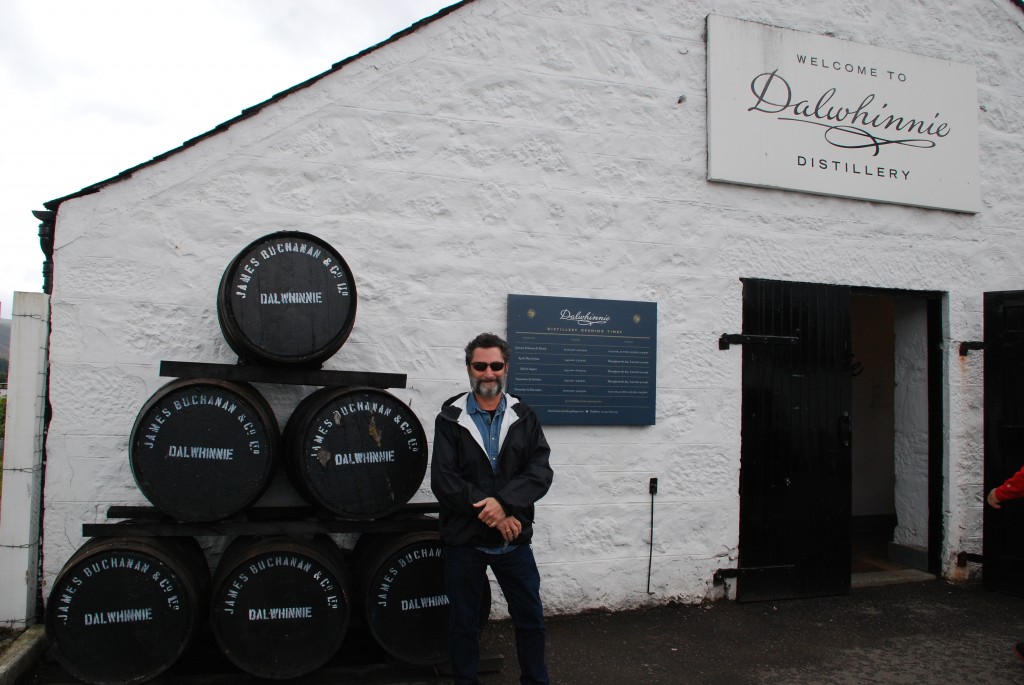 A quick stop for lunch, and we were off to Dalwhinnie, where, because of the late hour of the day, we opted for a tasting instead of a full tour.

Dalwhinnie’s scotches are interesting, with a notably higher level of smoke than the other Speyside choices and they do a really interesting thing by pairing the scotches you can taste with an accompanying piece of “matched” chocolate. It was a nice touch and they were on the mark with which chocolate worked well with each scotch.

An interesting footnote here, the entire Scottish highlands appears to be covered with heather (purple) and as the plants die each year, the roots of the plant compress into the soil, making the peat they use in the drying process.

This is different from the peat used in Islay, which is made up of different vegetation leading to the intensely smoky flavor those scotches have. When Dalwhinnie describes their flavors as including hints of heather-honey, that’s why!

Jim: I did not know that! I always wondered how heather and “heather-honey” got into a spirit… funny enough, even if I knew, I probably still couldn’t pick it out!

Our hotel that night was the Archiestown Hotel, in… well… Archiestown. I described it as being on the Scottish map of Nowhere, directly in the middle. It was a tremendous pleasant surprise.

A very small place – maybe 12 rooms – the opportunity for personal service was great and oh boy, did they ever do that! It was that night, as I went to the bar to see what scotches were available that I was first informed that they don’t call it “scotch” over there – its whisky!

Anyway, they had about 100 “whiskys” to choose from so dinner was enjoyable!

This is in chronological order, so I’m inserting a personal note here… we woke up Tuesday morning to a phone call alerting us to the passing of my wife’s father. After realizing we couldn’t get back to the airport early enough to fly home that day, we had a decision to make – to drive back to Edinburgh and sit out the day in the hotel or to finish up Tuesday’s tours, and fly home the next day. We decided to do the tours, but this cut our Scotland from 4 days to two. It’s okay – the next two visits were really great! 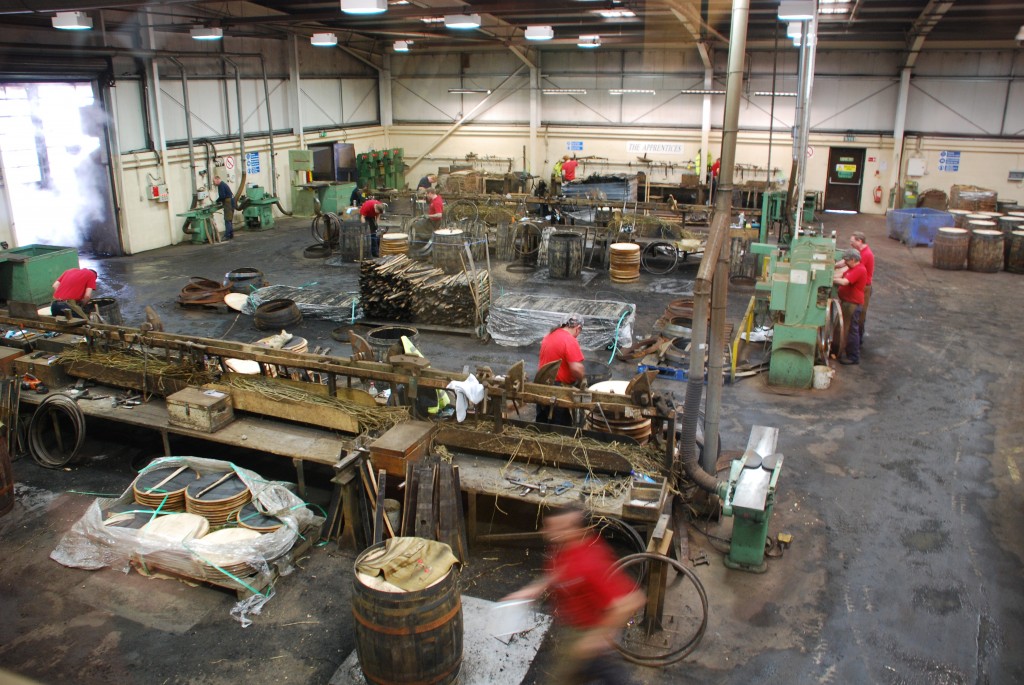 First up was the Speyside Cooperage.

Jim: I didn’t learn this until I went to Scotland and did some tours but a Cooper is someone who makes “barrels” (of varying sizes) and a Cooperage is where a Cooper does his work.

I gotta tell ya, it was fascinating to see how casks are built.

I never expected that the job was done with no caulking, glue, screws or nails. Those damn pieces of wood are cut precisely enough so that when the metal bands that hold the cask together, they don’t leak! It was also fascinating to realize how much the cask contributes to the final taste of the whisky. The kind of wood (the most preferred is American Oak) the previous contents of the cask (everything from rum to sherry to port wine to even Barolo wine) and the conditioning of the inside of the cask with flames.

These guys are a special kind of craftsmen, and they have to be good because they get quality 100% checked, but they also have to be fast as they get paid by the piece! 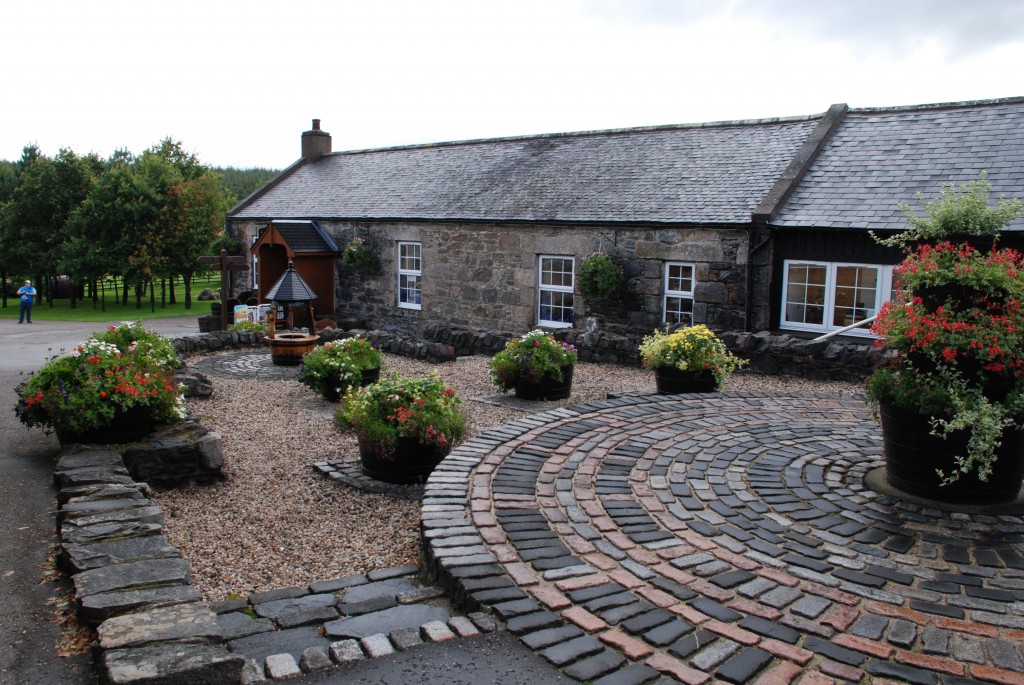 After that it was on to Cardhu. This distillery was originally owned by a woman, and these were lovely people. The tour was interesting – much like the Edradour tour.

They made an important point about the shape of their stills. The long necks of stills make a bend at the top, which varies off of an approximate right angle. This bend in the top of the still will affect the flavor and the top of Cardhu’s stills go decidedly upwards. This is one of the factors that lends to their decidedly light floral flavor.

THIS was the whisky product that appealed most to my wife, and would be a lovely desert whisky!

An interesting footnote, for all the distilleries, is that all whiskys that come out of the still are clear – it is the cask that gives scotch the amber color.

The distilled spirits also flow from the stills into a locked collection device, some of which were named “Wines Safe”. It was explained that the lock is needed because the measurement of the flow through that device is how the distilleries get taxed. Only one or two people in the distillery, and tax officials, are authorized to open it. They also measure the ABV in here and “mix” the flow of the distilled spirits from the multiple stills to maintain a consistent strength to the raw product.

Next week, we’ll get Part Two of this whirlwind tour and a deep dive into one of my (and Wayne’s) personal favorites – Balvenie.

All photos are courtesy of Wayne, thank you so so much for your generosity with the photos and this recap!

6 thoughts on “A Whirlwind Tour of Speyside (Edradour, Dalwhinnie, Cardhu), Part One with Reader Wayne”