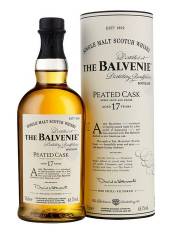 Balvenie is one of my favorite distilleries and the Balvenie 15 is very often my go to scotch these days. I really enjoy its fruitiness, subtle oakiness, and general sweetness (vanilla?) as a way to help wind down after a long day. Normally I can enjoy a peatier scotch but usually not for too long, as the heavy peat flavor starts to wear on me. So when I heard that Balvenie would be producting a 17 year bottle aged in a peated cask, I was intrigued.

The smoky and peaty flavors you find in classic Islays are usually introduce when the barley is being roasted. In the days of yore, they would roast the barley over peat, using it as a fuel source since it was abundantly available on the island, and that smokiness was infused into the barley. In years past, Balvenie has produced a peaty scotch in its Islay Cask, which put Balvenie scotch into a cask that once held a Islay scotch (thus imparting some smoky and peaty flavors).

I’m eager to give this a try (here are some tasting notes from someone who has tried it) as I’d love to try the flavors I’ve come to love in Balvenie combined with some new peatiness. From the notes, it seems like it the peat doesn’t take you full on but muddies the water a bit since it’s two flavor combinations you don’t often associate with each other.

I think it would make for, if not else, an intriguing combination that I’d like to try for myself!