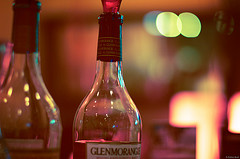 I only recently discovered the fine work of the The Sixteen Men of Tain in the form of Glenmorangie: The Original (their ten year expression) and was impressed by the depth of flavors. It stood up quite nicely against my “daily” dram of Glenlivet 12 (I don’t drink it daily… but I easily could!) and was comparably priced, so it was nice to discover something I could enjoy if I wanted a slight change of pace.

So this weekend, in a trip to New York, we stopped by Viscount Wines and Liqours with some friends to pick up wine for their wine tasting party. As they shopped for wine, i wandered over to the scotch section and took a look. I wasn’t specifically looking for Glenmorangie but when I saw the unmistakable amber box, I noticed there were several right beside it.

As it turns out, Glenmorangie has about half a dozen special finishes:

Several other distilleries offer finishes in sherry and port pipes, after years in a bourbon cask, but Glenmorangie is the first one I’ve seen that offers a version finished in Sauternes casks. (upon further research online, I see now that several distilleries offer Sauternes finishes)

1 thought on “Glenmorangie's Library of Finishes”