One of the great pleasures of being in a Facebook group with nearly a thousand members (join us!) is that there are so many experiences. There’s always someone who has an opinion on something, whether it’s a whisky or a glass!

I think different opinions, and arguments, are the lifeblood of any good community. Take all the opinions, mix them together, and then formulate your own.

One of the ideas that’s been floating around the group is the idea of blending your own whisky. Take a few drams you like and just experiment by mixing them together, letting it sit for a bit and then see what comes out of it.

I’ve personally never tried it but one of our intrepid members, Mike, has and I wanted him to share his approach.

Take it away Mike!

Blending Your Own Scotch Whisky 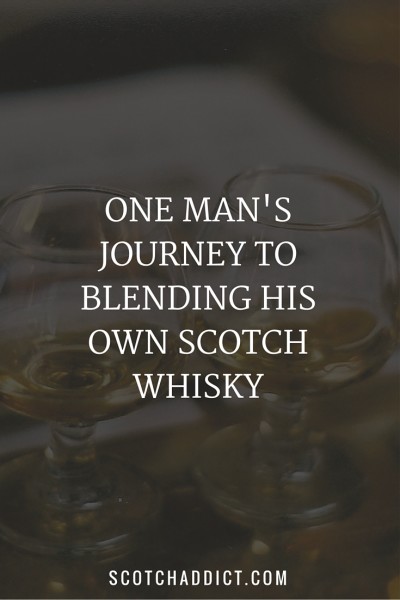 I was inspired to home blend Scotch after watching after watching Ralfy Review46. I enjoy, and agree, with his take on whisky and spirits in general. I wouldn’t call myself a connoisseur, that sounds too stuffy and self-important, and consider myself more of a hobbyist. I enjoy researching, tracking bottles, and collecting what might suit my taste.

In review 46, he suggests lining up four short drams of the same unpeated single malt. Then, leaving the first one alone, adding incrementally more drops of peated malt into each of the other three glasses with a straw. Two drops, then four drops, then eight drops. Then nose and taste each to experience the changes that occur.

This is a cool experiment for your palate.

What’s also cool, and what I would discover as I did this myself, was that you can change a single malt into a variation of itself. Adding peat to Glenfiddich 12. Adding heavy sherry influence to something that doesn’t normally have it. The combinations are endless for collectors who have a lot of bottles on hand.

I first did this after being disappointed by a bottle I purchased and had been struggling to finish. It was a bottle of Ballantines 17 and I didn’t like it very much. I think I was too new to whisky. It’s a fine blend that I was probably not ready to enjoy early in my whisky journey.

After pouring a dram one night, I decided to try “perking” it up with a teaspoon of another bottle I was not enjoying – Aberlour 18. The result of this “in glass” blending? I learned that my palate loved the blend far better than the two separately. It was more than the sum of it’s parts, so to speak. The lightly citrus blend was lifted by the inclusion of more single malt and it’s sherry influence.

I would do an “in glass” blend a few more times before graduating to blending into a separate vessel. I cleaned several small jars for blending.

My first small jar was just an old maraschino cherry jar from the fridge. It worked fine but I wanted something better. I moved onto little 2 ounce snap top bottles I found at a local dollar store, four for $3. Now I always have five mini blends sitting around waiting to be sampled. When I want to go for a slightly different taste, I can crack one of these minis and drink something totally unique.

When blending, I don’t get too complicated. I mix 50/50, 75/25, and even 33/33/33. The point is you are using your own collection and working on choosing from you own favorite taste elements. You also don’t need to blend a lot of volume, a few ounces is all it takes to experiment. If you enjoy it, make it more.

In addition to playing with different flavor elements, you can work on “fixing” a bottle you don’t otherwise enjoy on its own. Better to blend and try to find a dram you enjoy than pour it down the drain!

Also, there are some whiskies that are so revered you might never think to “taint” it by blending. No worries, that’s ok too. But imagine if you put a few drops of Talisker 18 into your glass of Macallan 18? Give it a shot, you might be surprised. Maybe you decide to never do it again, OR, maybe you just stumbled onto a new favorite.

An update on the Jura/Glenlivet/Redbreast blend – since I wrote this I tried this blend. Utter failure. The Glenlivet remained a strong presence, and while I enjoyed Redbreast and Jura 16 separately, this mix was an abomination. But it was a fun trial. I learned something about the strength of the Glenlivet here, and that Redbreast would do better blending with less sweet, as I successfully have mixed it with Coal Ila in the past. It’s all about the education.

Have fun people! Post your trial combinations, no matter if they succeed or fail.