We’re not talking boring whiskey trivia like “Oh hey guys, whiskey in Gaelic is known as ‘Uisge Beatha’ which means “water of life.” (That factoid is all true, but it’s pedestrian because everyone knows it).

Let’s first talk about some of the most famous names in whiskey — Jack Daniels, Jim Beam, and Johnnie Walker.

Jack Daniels is named after its founder, Jasper Newton “Jack” Daniel. When Jack was a young boy, he ran away from home and was taken in by a preacher and moonshine distiller named Dan Call, where Jack learned the distillation trade. He would later found a legally registered distilling business and the “Old No. 7” referred to his government registration number (No. 7 in district 4). Districts were later redrawn and Jack Daniel’s became Number 16 in district 5, so he kept the Old No. 7 label instead. 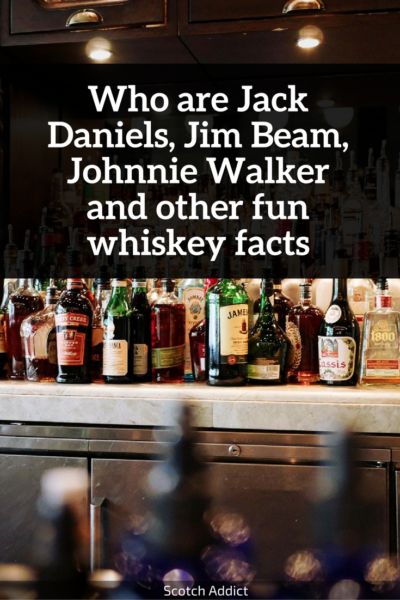 Jim Beam is named after James Beauregard Beam and he was not the founder of Jim Beam Bourbon. It was actually started several generations earlier by the Böhm family, which would later change their surname to Beam, in the late 18th century (1795 to be exact). The James B. Beam Distilling Company would be founded later, built off the work of the family business in distilling, and take on the name Jim Beam.

Johnnie Walker was first known as Walker’s Kilmarnock Whisky and was created by John “Johnnie” Walker, a grocer in Ayrshire, Scotland who sold whisky in his store. The Johnnie Walker name wouldn’t become famous until Johnnie’s son Alexander Walker and grandson Alexander Walker II made it famous – that’s why you often see John Walker & Sons on box sets and some bottles.

The Chivas Brothers weren’t actually brothers. Ha, just kidding, they started off as a grocer in Aberdeen in 1801, selling luxury goods and would eventually supply the royal family at Balmoral Castle. Eventually, James Chivas started to blend whiskies for wealthier clients and a brand was born. John just came along for the ride. 🙂

Did you know that Bourbon County in Kentucky is a “dry” county? You can’t sell any liquor there!

It’s believed that whiskey originated in Ireland where monks began distillation as far back as the 5th century, not Scotland. This is based on tax records where the Exchequer recorded that in 1495 an allowance was made to a friar for “aqua vitae.”