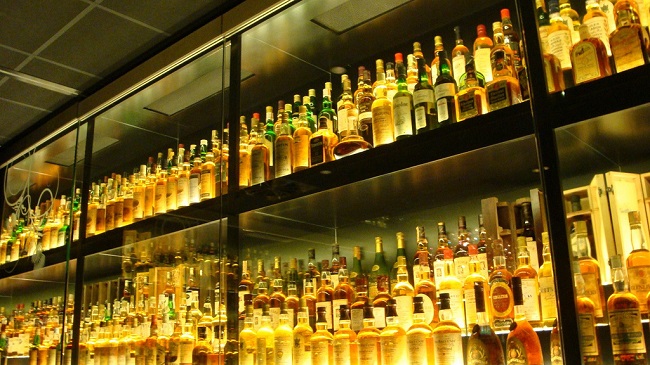 When it comes to premium liquors, Scotch whisky is one of the more expensive categories.

That’s because Scotch whisky has to come from Scotland and is subject to a variety of duties and taxes as it enter the United States. It’s also aged, a minimum of three years, so when you combine the aging with the duties and taxes, it makes for a more expensive product. It’s hard to drop $35 on a bottle of Glenlivet and not be sure if you’ll like it. It’s more (financially) palatable to spend less than $20 on a bourbon (which is a whiskey made of corn, produced domestically, and no minimum aging period).

Scotch whisky also has the most character and variety. Scotch whiskies have more variety in their manufacturing processes, are aged for more than three years so the aging process can have a greater effect, and you can have two Scotch whiskies that are widely divergent in their flavor profiles. Islays and Speysides anyone?

Then throw in the fact that it’s 40%+ alcohol by volume and you can see that it gets to be quite intimidating for a new enthusiast.

It doesn’t have to be though. I tapped our Facebook group, a bunch of seasoned pros, to find out what they think is the best beginner scotch whisky. If you’re new, you’ll see a lot of names in the list below but if you fire up Google you can find tasting notes for them. A lot of them are Speyside/Highland malts too, which I think is the best way to introduce someone to Scotch.

Alright, onto what our group thinks!

Me: My choice is Glenmorangie 10 (Original) because it’s inexpensive, fairly representative of a crisp and clean Speyside, and it was one of my first so I’m biased in that regard.

I would’ve recommend Glenlivet 12, my actual first dram, but that spicy finish will confuse most beginners. They’ll probably be getting used to the alcohol and the bite of the finish might be too much.

Patrick J.: Macallan 12 is my vote. Glenlivet is a great Scotch, but Macallan 12 is what I use to introduce friends to Scotch since it is always a crowd pleaser. Easy to drink, great flavor, approachable, nice mouth feel, just a lovely dram. I don’t have any experience with Buchanan’s that I can truly recall back to, other than I know I had a glass some years ago and never sought it out again.
Daniel W: Jim, I agree with you 100% Glenmorangie 10 is a perfect dram for a beginner. The sweetness makes it very accessible.

Percy S: The OP 12 may take the throne for me after further tasting, but at the moment I have to give it to Glengoyne 12. I feel it represents the basics of scotch whisky as I think of it best. Good value and readily available.

Honorable mention to Highland Park 10, but it’s not widely available. I like it better than HP 12.

Ari C: I actually would recommend Glengoyne 10. No peat and not to over powering on the sweet.

For a beginners blend I would pick Monkey Shoulder.

Mike W: Another good one is Aberlour 10yr.

Bill M: For a beginners blend, I also like Dewars 12YO.

Clayton F: I often buy Balvenie 12yr double wood for anyone starting out, not to aggressive but not boring either. Fiddich 12yr is a pretty good starter also, easy to find too. Oh so many starters!!!

Gary W: For a beginner and in the price range you have mentioned, Dewars, Grants, Monkey shoulder, and Black bottle immediately come to mind. Not to much alcohol bite and really easy to drink. I think the lower aged “glens” are also a decent choice. All are low to no peats, smooth easy drinking, and really don’t challenge your palate.

David C: All great suggestions so far! I would like to throw Glenfarclas 12 into the mix. It’s less than $50 a bottle and a great introduction to the sherry cask finish style of single malt. A little bit spicy with nice fruit on the palate, it’s got a nice, well-balanced sherry-forward flavor profile.

Ray C: I shared a dram Saturday evening with several friends who were first time scotch drinkers. One had received as a gift a bottle of McClelland’s Lowland Single Malt so we tried it. I enjoyed it, but more importantly, they enjoyed it. Fairly mild but nice taste. We all are looking forward to the next time we have a chance to get together and share a dram!

Brad L: I agree with Jim and some others. I always maintain a supply of (The Original) Glenmorangie. It’s a good “every day” whisky and is always well received by my guests who are not regular scotch drinkers.

Ray C: I agree with you guys about the Glenmorangie Original. It was the first single malt I purchased for myself and always keep one on hand. On bottle #4 now. Good stuff!

Randy H: Monkey Shoulder by far for a blend. I like Glenfiddich 15 for single since it’s not too expensive and easy to get.

David H: Highland Park twelve for those wanting to start with a bit of peat. For an inexpensive whisky great for beginners and long standing malt maniacs.

Aaron M: Will I be kicked out for suggesting a blend? Johnny Walker black is so easy to drink. That’s what got me hooked.

Anthony I: Highland park 12, though my buddy doesn’t usually like scotch and he really likes Laphroaigs Triple Wood…

Rogelio D: Monkey Shoulder and Glenmorangie 10 are great introductions for the price. As far as availability, Glenlivet and Glenfiddich 12 are everywhere so those are great to introduce to beginner’s also. Highland Park 12 is a great intro to smoke

Ken Feese Single malt to start Glenlivet 12 year, Blended to start would be Johnny Walker Black label. Both are economical examples of a basic Scotch and easy to enjoy. IMO
Yesterday at 6:48pm · Like

Arthur B: My first was Johnnie Walker Red Label and I’m not sure what brought me to seek Scotch but once I had decided on doing it I was attracted to the Red due to cost and liked the aesthetics of the bottle. After Red I went Black for a small price increase. I will be seeking out next a Glenlivet 12 for my first foray into the single malts.

Grant S: How about the glenrothes select inexpensive and very approachable.

William S: I started about 35 years ago with JW Black–and discovered single malts about 20 ago—For me Speyside and the highlands are great–I can’t handle Islay or Jura–but that is just me – Love everything Balvenie, MacCallan, Glenmorangie, Oban and Glenfarclas do

58 thoughts on “What is the Best Beginner Scotch Whisky?”