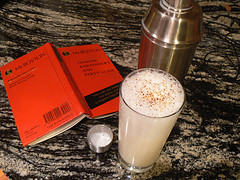 Have you ever tried milk in your Scotch?

If it sounds absolutely crazy to you, you’re not alone. It sounds insane to me.

Of all the things to mix with Scotch, one of the last things I’d think of would be milk. (the first thing would be… nothing, keep it neat please)

So imagine my surprise when someone suggested mixing scotch with milk in our Facebook group. Rather than mix it at random, which sounds it would’ve been a HUGE mistake for me but a lot of fun for you to read about :), I found this recipe.

I never made it though, I chickened out because the recipe’s author later updated his post to say he was nauseous afterwards.

Milk and booze are not new, we are all probably familiar with White Russians (vodka, Kahlua, and heavy cream), and there are milk punch recipes that are basically the above except replace Scotch with another liquor, like rum.

So, anyone out there brave enough to try it?