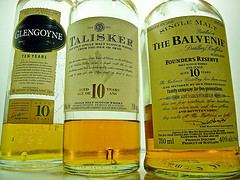 If I put two glasses in front of you, one the color of pale grass Bud Light and the other as dark as a Guinness Stout… which one do you think has more flavor? Which one has more punch and power?

It’s a natural bias. I know I have a bias when it comes to the color of my whisky.

The richer and darker the color, the more flavor I expect and, thus, perceive.

There’s a reason I used the analogy of Bud Light versus Guinness – I think my bias comes from my early days of drinking beer. You have your pale straw colored light beers, nearly devoid of flavor, and you have your dark porters and stouts, which pack a lot of malty goodness.

With whisky, I also associate the darker color with maturity. New make whisky is transparent and clear. It’s moonshine. Much of the color comes from the aging process inside a charred barrel. Presumably, the longer it’s aged and the darker the char of the barrel, the darker your whisky will be.

Would it surprise you to find out that companies have turned to artificial coloring to darken colors without having to age as long? They do it with caramel coloring, commercially known as E150a, and if you ask them, they do it for a variety of reasons.

Let’s knock out the basics of what it is and then go into the why.

What is this caramel coloring? It’s known as E150, which is a European designation, and it comes in four degrees of darkness (a through d, or class I to IV). It’s sometimes called spirit caramel.

How do they make Caramel E150? They caramelize commercially available food grade sweetners, like corn syrup and sucrose. In other words, they burn sugars. For Class I or A, there cannot be sulphites and ammonia compounds, which makes it the color additive of choice for whisky.

Can you taste the caramel sweetness? This is up for debate but the folks at Master of Malt did a blind taste test with 10 of their staff. Only one could pick out the glass of water with the caramel color additive (and they expected 1.66, since there were 10 participants and one of the six glasses had the caramel). While hardly a definitive study, at the very least it’s not going to obviously affect whisky.

Why do they use it? This is the billion dollar question right?

Companies will tell you that it’s for consistency. People expect a whisky to look a certain way and different batches will yield different colors, it’s just the nature of the maturing process. This is a legitimate argument and I buy it… however, I’m sure they also do it for branding.

Do you care if your whisky has caramel coloring? Do you avoid it? Ignore it? Had no idea? Don’t care?