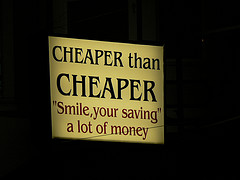 Single malt scotches have a reputation for being expensive and it’s a reputation that is well deserved as many single malts are quite expensive, on a ml by ml basis. Take a look at Macallan 18 – a 750mL bottle will set you back around $150! Macallan is a lovely dram, that’s for sure, but it’s also a pricey one.

Not all single malts are as expensive. Macallan has the branding power behind it and so they can charge a premium, much like how people pay more for a Mercedes Benz or a BMW. Is it worth it? Perhaps. But there are certainly cheaper single malt scotches that are very good at a fraction of the price.

The tricky part about buying single malt scotches in the United States is that everything is imported and thus everything is automatically more expensive. When compared to whiskey produced in the US, it’s going to be more expensive because it has to be imported. That said, there are a few options out there and here are the best cheap single malt scotches I can think of.

This is a bit of a cheat but if you’re new to scotch, consider a blend rather than single malt. Blends are far cheaper and you can get a great blend for less than a mediocre single malt. I’d argue that you shouldn’t go too cheap or it’ll turn you off on the idea of scotch in general but a Johnnie Walker, Cutty Sark, Chivas Regal, or Dewar’s will provide a great drink at a fraction of a single malt’s price. A 750mL Johnnie Walker Red, Cutty Sark, or Dewar’s should only cost you $20.

The Bowmore Legend is part of the Bowmore core range and available for less than $30 a bottle (750mL). It’s a light gold whisky with no age statement but still retains the smoky peat nose that Bowmore is known for. As an Islay (they claim the “first Islay malt”), it’s lighter than an Ardbeg but it’s definitely present. I’m a fan of Bowmore and I have several bottles in my collection (18, Enigma, and Mariner) and you won’t go wrong with this one.

Glenmorangie went all out into the finishes game, releasing several finishes in everything from port to Madeira to Sauterne. Their original is called Glenmorangie The Original and you can usually find it for just over $30 a bottle, sometimes less, and it’s a ten year old scotch that has fruity character and is fairly light. It’s light gold in color and one of my first scotches (in part because of price!). it is classified as a Highland and so expect those characteristics (interestingly enough, they also own Ardbeg which is your quintessential Islay in terms of smokiness and peatiness).

As funny as it sounds, glassware does make a huge difference because it can help accentuate your scotch. See our choices for the best glass for whisky here.

Glenfiddich 12 is a 12yr single malt you should be able to find for around $42 a bottle (750mL) and it’s your prototypical Speyside with nice oak, floral and fruitiness and no smoke. Glenfiddich is the best selling single malt scotch in the world and that’s because it’s affordable while giving you a good feel for what it means to be a Speyside single malt. At $42 it puts it on the outer range of what we’d call “cheap” but I wanted to mention it just because it’s so beloved.

What about all those sub-$20 a bottle single malts that you see in the stores? Names like Glen Kirk or Glen Ness or Shieldaig (update: I tried it, it was OK) and the like? I’ve never tried them. The only one I’ve heard bad things about is McClelland’s and that’s just from very few people. If you plan on mixing them, like in a Manhattan or something like that, I suspect those wouldn’t be a bad bet (though all things considered, I’d go with a blend in that case).

For drinking neat, which is what I prefer, I’d stick with these.

Since I posted this article, tens of thousands of readers have seen my list and wanted to contribute their own thoughts. With mine, I tried to find high quality, inexpensive expressions available almost everywhere so an omission is not an indictment.

Here are the most comprehensive comments of the batch below:

There are a lot of great comments below, I just wanted to pick out a few of the comprehensive ones that I feel you should not miss.

Lastly, you can make a “cheap” scotch look classier with a decanter and some fine scotch glasses.