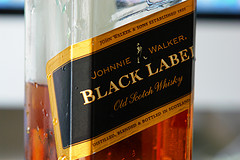 Like any other industry, people love their acronyms. One acronym that is thrown around a lot in whisky discussions on forums and chat rooms is NAS but it’s not a different type or brand of whisky. NAS, quite simply, stands for “No Age Statement.”

A NAS scotch simply means that it’s legally bound to have been matured for at least three years, which is Scottish law on whisky, but it could contain 12 years, 8 years, or just 3 years. Without an age statement, the distiller has more flexibility in what they produce because they aren’t limited by age.

What’s an example of a NAS whisky? Johnnie Walker is a classic and well known example of a popular blended scotch that is a NAS scotch. There are no age statements on many of the bottles (Reader Kent corrected me, there is an age statement on some of their bottles – many do not – my apologies!), they simply go with a color to help you discern the various levels, which could be associated with ages but they are not legally bound to them. If you look at the line of Johnnie Walker, it’s Red, Black, Gold, Green (discontinued though), Blue, etc. There are age statements on the Black (12), Green (15), and Gold (18) but not the others.

Why do distillers make NAS whisky? What’s happening to a lot of scotches, as they increase in popularity, is that they’re having trouble keeping up with demand. The tricky part is they can’t go back in time and make more! If you bottle a 12 year old scotch today, that means you put it in the barrel in 2000 or 2001. There is a limited supply and if demand spikes this year, you can’t make any more. By removing the age statement, you give yourself more flexibility and can keep up with demand more easily.

You’ll notice that Macallan only sells NAS whisky in duty free. That’s partially because of demand and in order to keep up, they needed to go to NAS. If you walk into a duty free store right now, you won’t see Macallan with ages, you’ll see colored boxes and the salesperson will tell you they correspond to the price points of 12, 18, etc.

I hope that demystifies one acronym for you!

8 thoughts on “What is a NAS Whisky?”