The glass you use matters but I don’t let it define my whisky experience.

I’m a relative novice when it comes to enjoying whisky. I very much enjoy the flavors but I don’t sit there savoring every last drop every single time I drink it.

It’s like music. Sometimes I like listening to the beat, sometimes I want to hear the words, and sometimes I just want to vibe with the general mood and not get too into it.

For the longest time, people drank whisky from any old glass because it meant whisky was getting into your body. There are debates over which is the best glass for scotch whisky but personally I think there are a few that honestly are different and worth looking at.

The rest is all fluff.

Personally, I usually use one of two glasses – a Glencairn or the NEAT whisky glass. I’ll explain why, plus a nod towards a new entrant to the market, and then I want to hear your opinion. 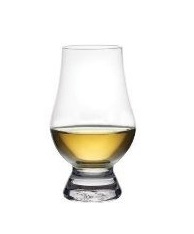 Besides a regular tumbler, which everyone knows about and needs no clarification, the tulip-bulb shaped Glencairn is probably the most popular glass. The Glencairn was designed to be like the nosing glasses used in distiller labs, when the professionals are nosing their work to check for quality and consistency. The shape is meant to intensify the nose on the whisky, which for novices can singe. 🙂

Personally, I like these glasses because of the intensity. Since they’re so popular, they’re also relatively inexpensive. A pair will run under $15. 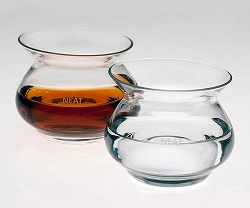 I was sent a few NEAT glasses to give them a try several years ago and they really are kind of neat. I nosed the same dram in a Glencairn and in the NEAT and the NEAT delivered on its promise that it evaporated ethanol vapors and bring out the other aromas in a whisky.

The shape isn’t unique but they’re more pronounced – it’s a tulip shape but more exagerated. The top tapers in more and the base is wider, which will allow you to swirl it a bit to wake up the spirit. It’s a fun glass to drink but near the end of a dram it does feel weird since you have to tip the glass nearly vertically for the last of the spirit to escape!

The NEAT glass is also affordably priced at under $20 for a pair.

In recent years, there have been several whisky glass makers who have claimed whisky is tastier in their glass. The most recent, as of late 2017, is the Norlan Whisky Glass. I’ve personally never used it but there’s no debating how nice the glass looks.

As for the design, it was “digitally crafted” with help from distiller Jim McEwan (formerly of Bruichladdich). It’s double-walled tumbler design with curves meant to simplify the drinking experience and aerate the whisky, to reduce ethanol vapors and lower the need to add water.

The only knock against the glass is that a pair will set you back $48.

What do you think? Does the glass matter to you?

4 thoughts on “Does the Glass Matter in Whisky?”