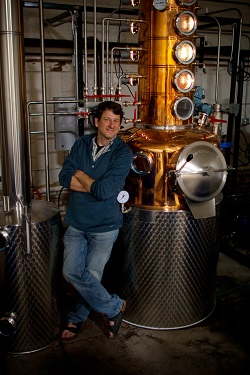 When I first started Scotch Addict, I was just getting into scotch whisky.

It would take me months, if not years, to learn the various subtleties of the spirit. How Scotch Whisky is made from the same basic ingredients as whiskey here in the states and how there are a lot of domestic productions worth looking at. Most notably, an entire class of spirits, Bourbon, that would open a whole new world after years of adherence to Scotch.

Fast forward to today and my love of things domestic (I like supporting the little guy, even if they’re not truly little by size and just little by how much television advertising they’r
e able to buy!) and I recently discovered a distillery named Few Spirits.

Few Spirits is based out of Evanston, Illinois and was the first legal alcohol-producing facility in Evanston, a city that extended prohibition until 1972. Yeah… that’s forty years after Prohibition was overturned by the 21st Amendment at the end of 1933!

They ferment, distill, and bottle everything on-site. They don’t buy stuff elsewhere and then slap their label on it (they don’t buy any outside alcohol from other producers), everything is made there and is legit (to be fair, newer distilleries don’t have a choice necessarily… but FEW has been around for enough years that they can do this).

They were kind enough to send me a few of their products:

There was just one missing from their lineup, the Few Single Malt Whisky. It’s produced in much smaller quantities and not widely available but I did get a chance to sample five fantastic spirits so let’s talk more about what was included than what wasn’t!

I will skip tasting notes on the Gins for now because my experience with gin is extremely limited. But, that said, I can tell you that they smell wonderful, the flavors are all the botanicals you’d want from a well produced gin, but to get into the notes is beyond my experience.

As for the two whiskies… let’s dive right in.

As a recent fan of bourbon, I can say that this Illinois product does the name quite well (and I love the classy bottles). The mashbill consists 70% corn, 20% rye, and 10% malted barley.

The thing that really jumps out at you is the spiciness. Most bourbons are characteristically sweet and that’s it. This bourbon has a little spice kick to it that adds a different dynamic because of 20% rye. There’s a bit of youth in this too but not something that surprises, I kind of like it.

I don’t usually put much stock in awards or ratings but it’s worth noting that the Beverage Testing Institute gave it a 93 (Exceptional) earlier this year.

I’ve been getting into more whiskies that have a higher rye concentration because I just love the added complexity that rye brings. The mashbill for this spirit is 70% Midwestern rye, 20% local corn, and then 10% two-row malted barley (an exact flip of the bourbon).

The rye gives it that peppery kick again but you get a lot of caramel and honey sweetness, much more than you’d expect with 70% rye, and a nice finish. BTI gave the Rye Whiskey an 88 (Highly Recommended).

Before I go, I wanted to throw in a few notes about the gins too. On a recent trip to Amsterdam, I had the pleasure of enjoying some Jenevere. Jenevere is juniper-flavored and was the inspiration for gin, so I’ve started to appreciate the subtle floral flavors in many gins.

While I haven’t yet evolved into sipping gin neat, there’s nothing more refreshing on a hot day than a gin and tonic!