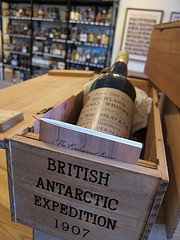 A replica Scotch is one that was created to recreate the experience of a famous bottle.

Now back in 1909, Whyte & Mackay had supplied the expedition with 25 crates of Mackinlay’s “Rare and Old” whisky. W&M would now take this rare and wonderful opportunity to recreate the whisky that was inside.

Why do they make replica Scotches? Because it’s fun. There’s no denying that it would be fun to drink a whisky once enjoyed by one of the most intrepid polar explorers, right? Even if you don’t like exploring, there’s a bit of magic and nostalgia wrapped around drinking a whisky from another era.

How do they replicate it? I’m not entirely sure, since this happens so infrequently and distilleries don’t reveal their secrets, but I suspect the master blenders just mix and match based on their experiences until the right flavors are recreated. Seems like an exceptionally tough task… but a fun one. 🙂

There aren’t a lot of replica whiskies out there outside of these rare situations, but The Macallan loves to make various replicas from the 19th century too.