Did you know that scotch is sometimes sold in 1.75L bottles? Until the other day, when I stumbled onto a 1.75L bottle of Glenlivet 12, I had no idea it came in such quantities. I enjoy Glenlivet 12, the packaging made it quite affordable, and while it isn’t the world’s most exciting scotch, it makes for a great everyday dram. Sometimes you want a little Spey finished with a spicy bite!

Speaking of that distinct spicy bite, I also discovered this educational article on Popular Science where they made use of a rotary evaporator to pull out the various components of scotch, specifically Glenlivet scotches, to investigate individually. They started with “white dog” unoaked/unaged Glenlivet whisky (aka “new make” or “cleric”), then continued with the 12-year, and then the 15 and 18. With each, they put it through the rotary evaporator to separate the whisky.

Running a liter of Glenlivet 12 through the machine, Dave pulls off the first 600ml into one vessel and the remainder into a different one. We taste the two.

The elements drawn from the oak, including all of the brown color, are less volatile, so they remain in the 400ml batch. The 600ml batch Dave calls “gray dog,” since it is a re-approximation of the white dog: a startling “deconstructed whisky” that’s been aged for 12 years in oak and then had many of the effects of the oak removed. It also has the bulk of the alcohol, concentrated to 120 proof from the original Glenlivet’s 80 proof. Its flavor is mellower than the white dog’s, but that youthful papery flavor, which was imperceptible in the non-evaporated Scotch, is back in evidence. The vanilla tones that the oak contributed are deeply muted, leaving a soft, ill-balanced, cloying clear spirit that reminds me of souring milk.

The article is fantastically entertaining to read.

I don’t know where I read it but a great tip for helping you get a better nose of a scotch is to put your hand over the opening as you swirl it around. The act of swirling will lift up the flavors and by putting your hand over it, you trap those flavors within the confines of the glass. Then, when you’re ready, lift up your hand and stick your nose in.

When trying to get a good nose, get one nostril as close to the scotch as possible. At first I felt silly, does the extra few millimeters make a difference? It really dos. Give it a try and you’ll definitely get a stronger scent than if you were to stick both nostrils in evenly.

So, get one nostril in closer and put your hand over the glass to give you a stronger nose. 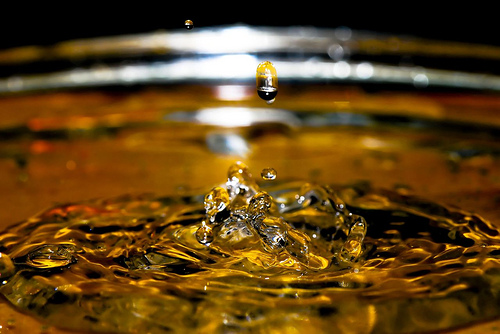 When you read the tasting notes for a particular whiskey or scotch, you’ll probably see a lot of references you won’t recognize. You may know what a vanilla is but it may be difficult for you to pick out its flavor profile from within the complexities of the whiskey itself. You may know what oak smells like and tastes like but you won’t know how that note plays in the symphony of other flavors.

How do you train and expand your palate? Hard work. What you need to do is just taste and smell different things and train your brain to remember the subtleties of the flavors and scents you pick up. As you are eating these different flavors, it’s important to really taste them, which may be different than how you normally eat. Let the jams and jellies, which heighten a fruit’s flavors, spread across your tongue so all your taste buds get a strong sense of what makes up its flavor.

It was the topic of an older Wine Library TV episode I’ve embedded below:

I wouldn’t taste your sock though… unless you really want to! 🙂

When it comes to enjoy scotch and “tasting” it, many of your senses come into play. You can see the color of the scotch, you smell the aromatics as you swirl it in your glass, you taste the flavors that awaken you as you sip it, and then comes the finish… the warmth and in your throat and the aftertaste that lingers in your mouth. Combined, the aromatics, the flavor, the heat, the mouthfeel, they all contribute to the act of “tasting” scotch.

One of the most important things about tasting is to become familiar with the flavors themselves. How can you understand what tastes “peaty” if you don’t know what “peaty” is? It’s like a child who has never tasted coconut, there is no way they can pull out that flavor from a rum cake, right? The best way to build your sense of flavors is to get a feeling for what each flavor is independently so that you can figure out what it is when you combine them either other flavors.

Let’s get to the senses…

The first way yo always interact with scotch is by looking at it, right? Scotches aged for a short period in oak casks will look very light golden in color. As they are more or are introduced to rum casks or sherry casks, the color becomes a darker amber. In general, a light colored scotch will be light in flavor and a dark scotch will often have more flavor complexity.

The first part of tasting scotch involves your nose and detecting the scents that leave the scotch. As I sniff more and more scotch, I’m getting better at detecting the various aromatics that leave the glass. Peatiness is likely the easiest to detect but there are other flavors as well like fruitiness, grass, heather, salt, sherry, spiciness, etc. Much like flavor, it will be like a symphony in which you will try to identify individual notes.

Your mouth is how you will get the three other components in tasting – body, palate, and finish. Body refers to how full the scotch feels. Some will feel light, others will have a weightier feel to them. As you drink more, you’ll be able to see how the body of each scotch differs and be able to figure out what is considered “light” and what is considered “full.” Body is also often called mouthfeel.

Palate refers to the flavors you taste and, as Michael Jackson has noted in many of his books, an experienced taster will have to return frequently to a scotch, over several days, to get a full sense of its flavors. As I said before in the Nose, it’s like a symphony. You know there are a lot of instruments but it takes a lot of time to identify them correctly.

Finish refers to the after-taste and more. After you swallow, there will be a lingering flavor that joins the warmth of the scotch going down your throat. It’s this flavor, along with the warmth, that finish refers to. When I began tasting scotch, all the finishes tasted similar (not the same, but similar) but as I enjoyed more varieties I discovered each ended differently and in complement with the other tasting aspects. Some ended more sharply than others, some had some spiciness, and others simply warmed the body like a warm blanket by the fire.

The one thing to take away from this isn’t that you should try to identify everything or try to know everything, just try to figure out one new thing per sip (or couple of sips). Think of a bottle as a novel, you learn one new thing each time you turn the page, and you’ll be able to enjoy it for a long time (and isn’t that what it’s all about?).