Balvenie emailed me a special sweepstakes they’re running for the holidays – you can win a scotch whisky aroma nosing kit.

Just in time for the holidays, The Balvenie is offering the chance to win a one-of-a-kind prize: An exclusive Scotch Whisky nosing and tasting kit. This unique kit contains 24 separate aromas and a dedicated nosing guide, as well as other essential whisky tasting tools. The lucky winner will also receive an exquisite Balvenie hipflask.

One of the coolest parts of the Macallan tour was their coopering and nosing areas where we could smell various aromas (it really highlighted the difference, at least for us, between dried and fresh fruits). This nosing kit is that fantastic experience in a kit and it’s appropriate that another premium scotch producer, Balvenie, is the one to come up with it. I’m a huge fan of their DoubleWood and at the moment I have a PortWood I bought in Heathrow duty-free just sitting in the case… waiting for the perfect occasion.

This would make a fantastic holiday gift, but I don’t believe they sell it.

I don’t know where I read it but a great tip for helping you get a better nose of a scotch is to put your hand over the opening as you swirl it around. The act of swirling will lift up the flavors and by putting your hand over it, you trap those flavors within the confines of the glass. Then, when you’re ready, lift up your hand and stick your nose in.

When trying to get a good nose, get one nostril as close to the scotch as possible. At first I felt silly, does the extra few millimeters make a difference? It really dos. Give it a try and you’ll definitely get a stronger scent than if you were to stick both nostrils in evenly.

So, get one nostril in closer and put your hand over the glass to give you a stronger nose. 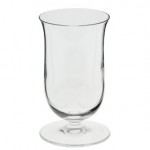 One of the reasons I started Scotch Addict was because my wife gave me a wonderful Christmas gift last year. She gave me six scotch tasting glasses by Reidel, a copy of Michael Jackson’s Complete Guide To Single Malt Scotch, and a copy of Whiskey: The Definitive World Guide. I thoroughly recommend both books for the scotch aficionado but today I want to talk about why you should get special glasses to help you enjoy single malt scotches (or any whiskey).

The primary reason why you want to use a special glass is because it allows you the ability to both smell and sip the scotch at the same time. As long as the glass affords you that ability, it’ll work for scotch purposes. The idea is that you’ll want to swirl the scotch around in the glass and then smell the fragrances and aromas that waft up to your nose. A traditional whiskey tumbler is not an ideal glass, even though it offers you the sip and smell ability, because it was designed for drinking scotch and sodas. However, not there’s no reason to be a snob, if all you have is a plastic Solo cup, you can still enjoy scotch!

When you read the tasting notes for a particular whiskey or scotch, you’ll probably see a lot of references you won’t recognize. You may know what a vanilla is but it may be difficult for you to pick out its flavor profile from within the complexities of the whiskey itself. You may know what oak smells like and tastes like but you won’t know how that note plays in the symphony of other flavors.

How do you train and expand your palate? Hard work. What you need to do is just taste and smell different things and train your brain to remember the subtleties of the flavors and scents you pick up. As you are eating these different flavors, it’s important to really taste them, which may be different than how you normally eat. Let the jams and jellies, which heighten a fruit’s flavors, spread across your tongue so all your taste buds get a strong sense of what makes up its flavor.

It was the topic of an older Wine Library TV episode I’ve embedded below:

I wouldn’t taste your sock though… unless you really want to! 🙂

When it comes to enjoy scotch and “tasting” it, many of your senses come into play. You can see the color of the scotch, you smell the aromatics as you swirl it in your glass, you taste the flavors that awaken you as you sip it, and then comes the finish… the warmth and in your throat and the aftertaste that lingers in your mouth. Combined, the aromatics, the flavor, the heat, the mouthfeel, they all contribute to the act of “tasting” scotch.

One of the most important things about tasting is to become familiar with the flavors themselves. How can you understand what tastes “peaty” if you don’t know what “peaty” is? It’s like a child who has never tasted coconut, there is no way they can pull out that flavor from a rum cake, right? The best way to build your sense of flavors is to get a feeling for what each flavor is independently so that you can figure out what it is when you combine them either other flavors.

Let’s get to the senses…

The first way yo always interact with scotch is by looking at it, right? Scotches aged for a short period in oak casks will look very light golden in color. As they are more or are introduced to rum casks or sherry casks, the color becomes a darker amber. In general, a light colored scotch will be light in flavor and a dark scotch will often have more flavor complexity.

The first part of tasting scotch involves your nose and detecting the scents that leave the scotch. As I sniff more and more scotch, I’m getting better at detecting the various aromatics that leave the glass. Peatiness is likely the easiest to detect but there are other flavors as well like fruitiness, grass, heather, salt, sherry, spiciness, etc. Much like flavor, it will be like a symphony in which you will try to identify individual notes.

Your mouth is how you will get the three other components in tasting – body, palate, and finish. Body refers to how full the scotch feels. Some will feel light, others will have a weightier feel to them. As you drink more, you’ll be able to see how the body of each scotch differs and be able to figure out what is considered “light” and what is considered “full.” Body is also often called mouthfeel.

Palate refers to the flavors you taste and, as Michael Jackson has noted in many of his books, an experienced taster will have to return frequently to a scotch, over several days, to get a full sense of its flavors. As I said before in the Nose, it’s like a symphony. You know there are a lot of instruments but it takes a lot of time to identify them correctly.

Finish refers to the after-taste and more. After you swallow, there will be a lingering flavor that joins the warmth of the scotch going down your throat. It’s this flavor, along with the warmth, that finish refers to. When I began tasting scotch, all the finishes tasted similar (not the same, but similar) but as I enjoyed more varieties I discovered each ended differently and in complement with the other tasting aspects. Some ended more sharply than others, some had some spiciness, and others simply warmed the body like a warm blanket by the fire.

The one thing to take away from this isn’t that you should try to identify everything or try to know everything, just try to figure out one new thing per sip (or couple of sips). Think of a bottle as a novel, you learn one new thing each time you turn the page, and you’ll be able to enjoy it for a long time (and isn’t that what it’s all about?).