Look at enough bottles of Scotch whisky and you’ll start seeing the same words over and over again. How many distilleries have “glen” in their name? Glenlivet, Glenfiddich, Glengoyne, Glenfarclas, Glen Grant… you get the idea. Many of the distillers have names that describe where they’re located, which is why glen (which means valley in Gaelic) is so prevalent in so many names.

I started looking for common syllables in distillery names and come up with this short list.

I found it kind of fun to see what the origins of some of those syllables. For example, I thought it was interesting that there were different terms for a valley. You have strath for wide and shallow valleys and glen for narrow and deep valleys. Were there any that surprised you? 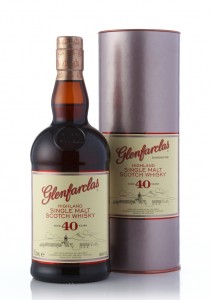 What Does John Know? that Glenfarclas has released a 40 year old whisky to their offerings. Glenfarclas will now have two 40 year old offerings, the new 46% ABV and the existing limited edition 43% Scottish Classic that was limited to 600 bottles.

Here are the tasting notes from the Glenfarclas website:

Nose: Reminiscent of relaxing in an old leather armchair while eating walnuts and chocolate covered raisins.

Flavour: A sweet initial taste, orange segments dipped in liquid chocolate. Then a lovely flavour of burnt brown sugar at the back of the mouth

Finish: The dry finish oozes big tannins and more rich dark cocoa beans. Let the whisky breathe a little or add a drop or two of water to fully open up the dram